The Central Ohio Section held a meeting at ASNT Headquarters in Columbus, Ohio on 26 September. There were 17 members, students, guests and vendors in attendance. Edward Walker gave a presentation on “New XRF Technologies Speed, Simplify & Automate Plant Nondestructive Testing Positive Material Identification Inspections,” a brief overview on how the X-ray fluorescence (XRF) technique provides qualitative and quantitative material characterization for detection, identification, analysis, quality control, process control, regulatory compliance and screening, for metals and alloys, mining and geology, scrap and recycling, environmental and consumer safety, education and research, and general manufacturing. The presentation included an explanation about how XRF analyzers work, a comparison with some existing techniques, and a live demonstration of the inspection of some weld samples. After the presentation, Walker received a gift certificate from Section Chair Brian Frye. The Section would like to thank Walker for this informative presentation. The vendor for the evening was Olympus NDT, Inc. The Section would also like to thank the vendors for their continued support.

The Section held another meeting at ASNT Headquarters on 24 October. There were 12 members, guests and vendors in attendance. ASNT President Raymond Morasse gave a presentation depicting the benefits of ASNT and how national and other sections can provide help and support for one another, which entailed a brief overview of the history and volunteer structure of ASNT and which highlighted the importance for local section meetings. Morasse delved into some of the ASNT membership analysis statistics and showed the Section how the international sections are growing speedily. He shared his 30 years of section operation experiences and encouraged the Central Ohio Section to participate in ASNT national activities. He went on to say that the local sections are important foundations of ASNT to fulfill member needs in the industry. After the presentation, Morasse received a gift certificate from Brian Frye. The Section would like to thank Morasse for this knowledgeable presentation. 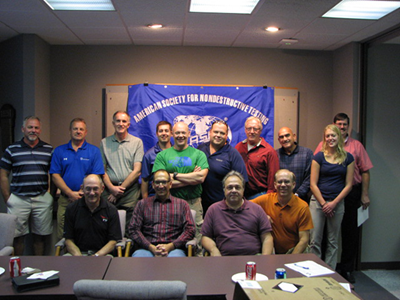 Members of the Central Ohio Section gathered in September for a presentation on X-ray fluorescence and positive material identification.

Twelve members of the Greater Houston Section’s board, committee chairs and members met at Brady’s Landing on 9 October for an executive committee meeting, presided over by Section Chair Jeff Wagner. During the meeting a review and approval of the September meeting minutes and treasurer’s report were concluded, followed by standing and board committee reports presented by the appropriate committee chairs. The main topics of discussion were revisions to the program committee schedule, Section t-shirt delivery, the 2014 Vendor’s Night venue, planning of the 2013 Christmas Party and development plans for the updated Section website.

Following the adjournment of the executive committee meeting, 97 members and guests attended a social hour and dinner. A large number of local nondestructive testing (NDT) students were in attendance. During dinner the traditional drawing for door prizes was held. The door prizes were donated by the October sponsors: Applus RTD; Houston Analytical Systems, Inc.; NOV Tuboscope; Oceaneering International, Inc.; Olympus NDT, Inc.; and Weldsonix, Inc. Following dinner, Greg Hudkins presented a check for $16 355 to the Section for its participation in the International Chemical and Petroleum Industry Inspection Technology Conference this year. Dennis Hudley, of Circle Systems, Inc., presented on the NDT and testing applications in auto racing. Hudley has been involved in NDT and racing since 1967. His presentation brought to light applications of NDT that are not typically thought about in the area. An appreciation award was given to Hudley for his presentation.

The Hampton Roads Section held its annual joint meeting with the Old Dominion Section on 21 October at Rocco’s Steakhouse and Grill. There were 25 attendees, 15 of which were Hampton Roads members and guests. The topic of the meeting was “Update to the Virginia’s Radioactive Materials Controls.” The speakers were Mike Welling and Beth Schilke, both from the Virginia Department of Health. It was a very interesting presentation that sparked a long question and answer session afterwards. 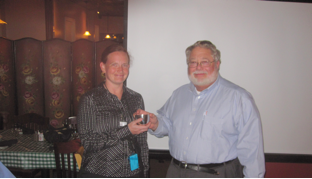 Beth Schilke (left) received a Jefferson Cup on behalf of both sections from Bill Via at the October meeting of the Hampton Roads Section.

The Kuwait Section’s monthly meeting was held on 28 September at Heavy Engineering Industries and Ship Building Company, MAB Industrial Area, Kuwait, with 15 attendees. The Section committee chair began by welcoming everyone and going over the proposed meeting agenda.

Section officers reminded attendees that an ASNT NDT Level III examination would be conducted on 18–19 October, and that participants had been confirmed. 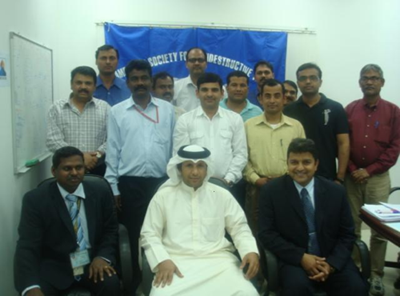 The Saudi Arabian Section held its fourth technical dinner meeting for the fiscal year 2013–2014 on 7 October at the Carlton al Moaibed Hotel in Al Khobar, Saudi Arabia. There were 130 members and guests at the Section-sponsored event.

Section Chair of the Board Mohammad A. Al Salih inaugurated the meeting and welcomed everyone, including sponsor company NDT & Corrosion Control Services (NDT&CCS). He delivered announcements, including about the Level III exam, which were held 26–27 October. He also announced two short courses: “Projector Maintenance,” which was held 17 November, and “Emergency Source Retrieval,” which took place 17–19 November.

After the presentation, there was the usual question and answer session. Murugan received a plaque of appreciation for his talk, and the last part of the meeting included a distribution of door prizes. Afterward, all attendees enjoyed a buffet dinner served by the Carlton al Moaibed. 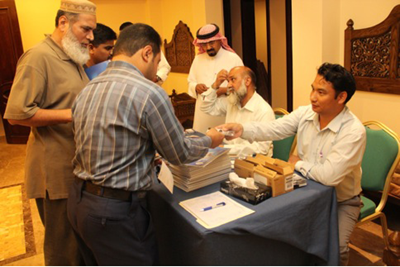 A popular event each year, the International Chemical and Petroleum Industry Inspection Technology Conference (ICPIIT) brings together a variety of speakers and exhibitors involved in the petrochemical sector of nondestructive testing. Topics for the 13th ICPIIT included fitness for service, inspector certification, inspection trends in welding, and many more. 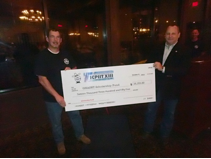 Jeff Hocker (left) and Greg Hudkins presented a check to the Greater Houston Section for its role in the 13th International Chemical and Petroleum Industry Inspection Technology Conference.