The Central Ohio Section took a field trip to the Det Norske Veritas (DNV) Columbus Materials and Corrosion Technology Center on 23 May. Michiel P. Brongers, principal engineer/senior project manager, and Juan Carlos Ruiz-Rico, senior professional Level III, hosted the Section. Brongers gave a presentation on “Introduction to DNV Projects and NDT Applications,” a brief overview of NDT techniques used at DNV Columbus. The presentation included an introduction to DNV, laboratory and testing facilities, NDT techniques at DNV, and a laboratory tour conducted by lab manager Peter Youll. The DNV office in Columbus has approximately 120 employees, divided over three groups: the materials and corrosion technology center, the pipeline and facilities risk management department, and a research and innovation group. DNV has a 2230 m2(24 000 ft2) full-service corrosion and materials laboratory in Dublin, Ohio, providing research, testing and failure analysis services. Facilities include a wide range and volume of electrochemical and mechanical instrumentation, autoclaves for high pressure and temperature exposure, flow testing facilities, safety systems for hydrogen sulfide and other poisonous gas exposure, microscopy, and analytical measurement capabilities. After the presentation, Brongers received a gift certificate from Section Secretary Peter Pan. The Section would like to thank Brongers, Ruiz-Rico and Youll for this informative and interesting presentation and lab tour. The Section would like to thank DNV for its continued support. 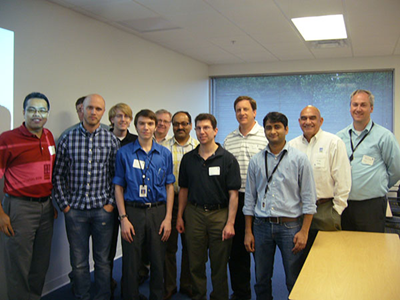 Fifteen members, students and guests of the Central Ohio Section met for a tour of Det Norske Veritas in May.

The Chesapeake Bay Section is officially back up and running, having held its first official meeting on 30 May at Bertucci’s in Columbia, Maryland. Eight members enjoyed a light dinner and technical presentation by Section Secretary Rusty Jones. Jones is a Federal Aviation Administration (FAA) senior technical specialist for nondestructive testing (NDT) and composite materials maintenance. His presentation, titled “Aviation and NDT” provided an FAA perspective of regulations pertaining to NDT qualifications and inspections of composite airplane structures.

On 22 June, the Hampton Roads Section held its annual golf tournament to end another successful year. The tournament was a best ball tournament, with five teams, held at Sleepy Hole Golf Course, in Suffolk, Virginia. After golf, lunch and awards were received in the Surry Plantation House located on the property.

The Hampton Roads Section ended its year with an annual golf tournament.

The Kuwait Section held a meeting on 27 June, with nine attendees. The Section Committee Chair began by welcoming everyone and going over the proposed meeting agenda.

Section Officer Sangli Gunasekharan then presented a technical talk on “Leak Detection Testing – Bubble Forming Technique.” The talk was very informative and useful for those carrying out leak testing (LT), particularly in pressure vessels and tanks. He also explained the importance and applications of LT in the oil and gas and automotive industries. Section members participated by asking questions during the presentation. The attendees appreciated the effort by Gunasekharan.

Section Officers V. Vaidyanathan and R. Anabalgan discussed further various applications of LT, while Section Officers S.S. Murugan and D.M Tripathi discussed the application of LT in critical locations such as lap Joints in tank bottom plates. Farukh Nasim and Shabbir Ahmad elaborated on the limitations of LT, particularly that the minimum testing time is not the same across different international standards and codes.

Section officers reminded everyone that ASNT NDT Level III examinations will be conducted 18–19 October and that participants have been confirmed. 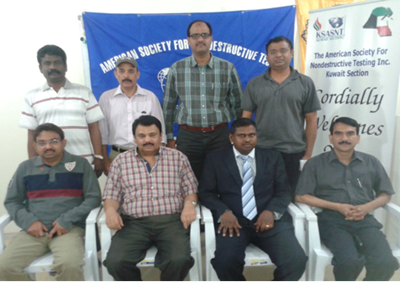 The OKC Section held a meeting on 29 May at Crossroads Institute’s facility in south Oklahoma City, Oklahoma. There were 12 members in attendance. Section Chair Walt Matulewicz opened the meeting and asked attendees for volunteers to fill the recently vacated Section treasurer position. Greg Pupchek, of Virtual Media Integration, gave a fascinating presentation about computed radiography and digital radiography, and thoroughly explained the benefits of digital radiography over traditional, film-based radiography. At the end of the meeting, Matulewicz presented Pupchek with a certificate and pen set out of appreciation for his visit. 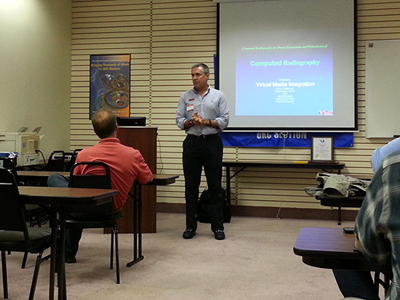 The May meeting of the OKC Section included a technical presentation on computed and digital radiography.

The San Diego Section hosted a change of gavel meeting at the 94th Aero Squadron Restaurant, with nine members and guests in attendance. The speaker for the evening was the outgoing chair, Hans Weber. Weber provided an overview of the 2012–2013 year with Section accomplishments and thanked the entire board of directors and officers for a successful year. The gavel was then passed to the incoming chair, Larry Nelson. Nelson commented to the new board of directors and officers that the Section will continue to be successful. He also thanked Weber for his activities in support of the Section.

The Saudi Arabian Section held its 12th technical dinner meeting for fiscal year 2012–2013 on 17 June at the Dhahran Palace Hotel, Dhahran, Saudi Arabia. The Section-sponsored meeting was attended by 158 members and guests.

Section Board Chair Mohammed A. Al Salih started the meeting with a warm welcome and announcements. He reminded everyone of the Section Level III exams on 26–27 October and noted that the Section calendar for 2013–2014 was being prepared. All nondestructive testing companies were invited to participate as a show of Section support. He also announced that there are planned short courses coming up on the topics of “Projector Maintenance” and “Emergency Source Retrieval.” Pre-booking was available until September.

After announcements, Al Salih invited Section Chair Mohammed A. Abu Four to start his presentation regarding the Section overview of the previous year.

Following the presentation, the annual recognition and award ceremony was held. Longtime members were recognized, and 17 top Section members who attended 10 or more meetings over the past year received a global clock in appreciation.

At the end of meeting, members enjoyed a buffet dinner served by the Dhahran Palace Hotel.

June was a busy month for the Saudi Arabian Section. Not only did members host an end-of-year wrap-up meeting, but they also participated in a short course on ultrasonic testing. There are already activities planned for when the Section starts back up, including Level III examinations in October. 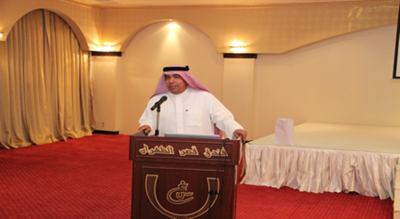