In March, the Arizona Section held a meeting where Section Chair Dale Lynn gave a presentation on “X-ray Radiographic Film Interpretation.” Lynn is an up-and-coming nondestructive testing professional, and the Section thanks him for his presentation.

The Chicago Section met on 11 March at Mack’s Golden Pheasant restaurant in Elmhurst, Illinois, with 15 members and guests in attendance. The speaker for the evening was Mike Chopik, a radiographic Level III at Chemring Energetic Devices, Downers Grove, Illinois. Chopik addressed the “Calibration and Performance Qualification of Computed Digital Radiographic Systems.” He highlighted all the tools required, such as the platinum wire gage, contrast sensitivity blocks, and monitor verification, as well as the measurements required such as signal-to-noise, contrast-to-noise, laser jitter and dimensional accuracy. 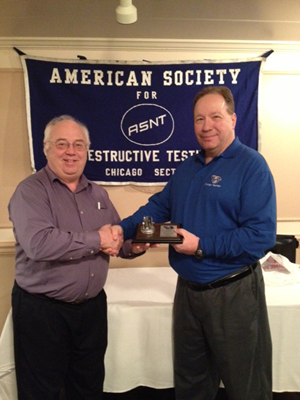 The Greater Houston Section awarded scholarships to three nondestructive testing students during its 10 April meeting. The scholarship applications and presentations were awarded by members of the Section’s Award Committee, which was chaired by Director at Large Cooper Dunn.

The March 2013 meeting of the Greater Philadelphia Section was held on 7 March at the Crowne Plaza hotel in Trevose, Pennsylvania. After an excellent meal provided by the Crowne Plaza staff, the 18 members and guests enjoyed a presentation on “Inspection of Aerospace Composites” by Valery Godinez, of Mistras Group, Inc. Godinez’s presentation included an overview of the current test techniques commonly used in inspecting composite structures used in aerospace applications, with special emphasis on ultrasonic and acoustic emission techniques. Also included were some hints at what future testing systems might entail. 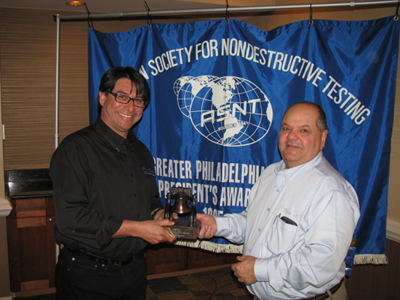 On 9 April, the Hampton Roads Section met at Bauer Compressors, Inc., in Norfolk, Virginia, for a plant tour. Six members and two guests were in attendance. Mark Dorsch led the tour of the facility.

The Kuwait Section held a meeting on 13 April with eight attendees. The Section committee chair began by welcoming everyone and going over the proposed meeting agenda. Section Officer Sangli Gunasekaran presented an informative technical talk on visual testing (VT). He elaborated on and explained the importance and applications of VT in the oil and gas industry. All those present appreciated the talk.

Section Chair Nayef Al-Enezi reminded everyone that ASNT NDT Level III examinations will be conducted on 18–19 October, and the participants have been confirmed. 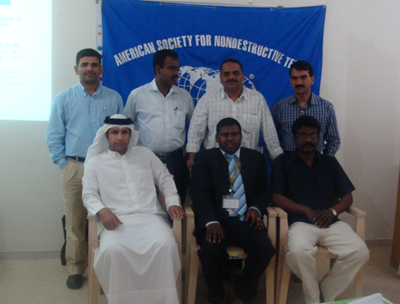 Members of the Kuwait Section met in April to discuss visual testing as well as Section news.

The North Texas Section met on 21 March at Ernie’s Seafood Restaurant in Fort Worth, Texas. There were 12 members and guests present to hear guest speaker Alan Stevens, technical sales for North Star Imaging, give a presentation on “Computed Tomography Systems and Applications in the Nondestructive Testing Industry.”

This was an informative presentation. The briefing focused on the newest evolution and simplification in use of computed tomography for many applications. Computed tomography is capable of giving information and inspection capability in dimensions that could not formerly be inspected. Now the technology is becoming more user friendly and generally more affordable, yet it is still technically advancing. Stevens also discussed digital radiography. 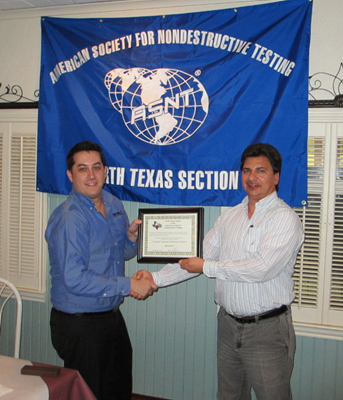 The Old Dominion Section celebrated its 35th anniversary on 20 April. A group of approximately 35 members and spouses attend a formal dinner at the 2300 Club of Richmond, Virginia. The group watched a slideshow from past meetings, which was enjoyed by all. There were five corporate sponsors for the night: Tim Flaherty, with Detek, Inc.; Keith Eric, with Olympus NDT; Chris Vargo, with Dominion NDT Services, Inc.; Joe Monroe, with Eastern NDT Inc.; and Mistras Services. The Section looks forward to many more productive years. 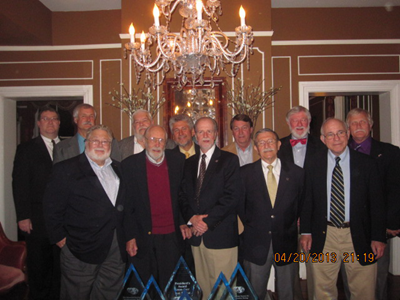 Twenty-one members, students and instructors came together at the Rock Salt Steak and Seafood restaurant on Lake Union in Seattle, Washington, on 11 April. A rousing game of nondestructive testing Jeopardy was hosted and moderated by Tim Burkholder and Emery E. Roberts, of Mistras Services. Topics consisted of radiography (film and digital), magnetic particle testing, penetrant testing, ultrasonic testing and infrared testing. Often debated questions were provided by the audience. The audience was divided in to two teams, Alpha and Beta. Alpha team made an outstanding comeback after being down by 900 points. Volunteering to provide updated answers and questions were Richard Bossi and Trey Gordon. Organizations represented included Clover Park Technical College (CPTC), the Boeing Company, Mistras Services, ABW Technologies and AcousticEye, Ltd.

After the game and dinner, the group conducted the attendance incentive drawing. The winner was Jeff Siegel, of AcousticEye. Elections were also held and results ratified. New officers and directors for the 2013–2014 program year will be installed at the September 2013 meeting. Tony Song, from CPTC, joined last month and participated again this month.

The Pittsburgh Section held a joint meeting with the American Welding Society on 12 March at the Springfield Grille, near Mars, Pennsylvania. The group of more than 40 enjoyed a presentation on “Nuclear Reactor Vessel Head Inspection and Weld Repair,” given by Wes Williams, staff engineer at First Energy Nuclear Operating Company.

Members of the Pittsburgh Section and American Welding Society came together in March for a presentation on nuclear reactors.

The San Diego Section hosted a meeting on 2 April at the Best Western Seven Seas hotel, with 23 members, guests and vendors in attendance. Robert Siegel, of Sherwin, Inc., provided a very informative presentation on “PSM-5/TAM Panels,” including the manufacturers, reasons for use and problems encountered when using the panels. There was also a group panel discussion on troubleshooting, cleaning, indications sizing and panel recertification. The Section would like to thank Siegel for a great presentation.

The evening concluded with the monthly raffle. Raffle prizes were sponsored by the Section, as well as FujiFilm, Sherwin, Test NDT, LLC and Northrop Grumman Corporation. The Section would also like to thank the vendors for their support.

The Southern Africa Section had its last meeting for the 2012–2013 year on 10 April. It was a very successful year for the region. More ASNT NDT Level III examination sessions were held via QCCO in Egypt. There are now 38 qualified Level IIIs in Southern Africa. The Section also had some very interesting and informative talks given by prominent individuals in the nondestructive testing (NDT) industry. These meetings were very well attended.

One of the highlights of 2012 was the World NDT Conference in Durban. Regional Director Mark Ormrod was invited to chair a meeting at the Hilton hotel in Durban and inspired all present to greater achievements for Southern Africa. The local committee manned the ASNT stand together with Wayne Holliday and Bob Potter. It was wonderful for everyone to get to know each other while learning more about running a local section. Another highlight of the year was the receipt of a certificate of recognition from ASNT for a well-run Section. This was awarded at a special dinner to the chair, Ben Beetge.

In addition to nationally presented ASNT awards, many sections also award honors to members at the local level in part to foster a sense of pride and appreciation for outstanding technicians and students in their home state or region. 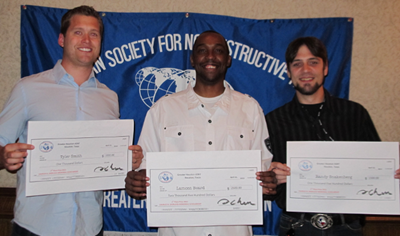