The Central Ohio Section held a meeting at ASNT Headquarters in Columbus, Ohio, on 22 August. There were 18 members, students, guests and vendors in attendance. Sheri Martin, product line manager at Yxlon, Inc., gave a presentation on “Digital Radioscopy and Computed Tomography in Electronics and Micromechanics Applications: Today’s Possibilities,” a brief overview of the technique used to inspect electronics and micromechanics in the electronics manufacturing industry. The presentation included an explanation about how digital radioscopy and computed tomography works, a comparison with some existing techniques and a demonstration video. Currently, computed tomography scan data can be converted in real time to a computer-aided design model to check manufacturing tolerance for quality control. Combined with a 3D printer, computed tomography scan data can help improve manufacturing assembly processes. After the presentation, Martin received a gift certificate in appreciation from Section Chair Brian Frye. The Section would like to thank Martin for her informative and interesting presentation. The Section would also like to thank the vendor for the evening, Yxlon, for sponsoring dinner, along with the other vendors for their continued support. 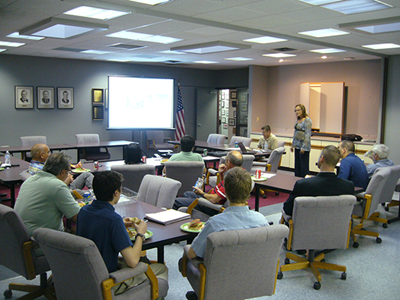 Sheri Martin (standing), of Yxlon, delivered a presentation to the Central Ohio Section on current techniques used in the electronics manufacturing industry.

The Cleveland Section held its 37th Annual Golf Outing at the Coppertop at Cherokee Hills Golf Course in Valley City, Ohio, on 23 August. Sixty golfers and guests attended this event, followed by a steak dinner. Special thanks go to the golf outing chair, Tony Sansavera, Test Equipment Distributors sales representative, who put on another great event and made the weather cooperate with a sunny day and light wind.

The winning golf team consisted of T.J. Gigliotti, Chase Masuga, Tom Gigliotti and Dan Masuga, who represented Mistras Group. A multitude of prizes were awarded with the reserve raffle and 50/50 prize, which was won by Bob Williams, of R.L. Holliday Co. 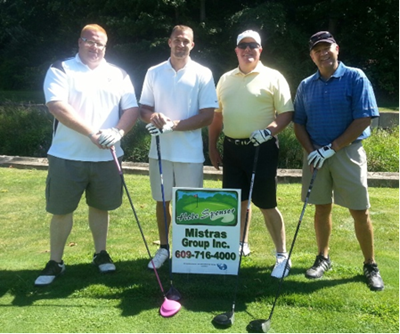 Eighteen members and guests attended the Connecticut Yankee’s first meeting of the 2013–2014 year, at the Groton Inn and Suites hotel, in Groton, Connecticut, on 18 September. The guest speaker for the night was Larry Mullins, Zetec applications consultant and the ASNT regional director for Regions 1 and 2. Members from the Boston and Narragansett Bay sections, as well as a visiting member from Cleveland, Ohio, attended. Mullins entertained the audience by showing pictures of interesting jobs he had been involved in and sites of earlier days where he had worked. Mullins is on a quest to reenergize the ASNT community and challenged those in attendance to speak up with ideas. The Section presented Mullins with a deck pyramid from Mystic Seaport, the Museum of America and the Sea. The deck pyramid was invented to aid those at sea, and provided light below the main deck. 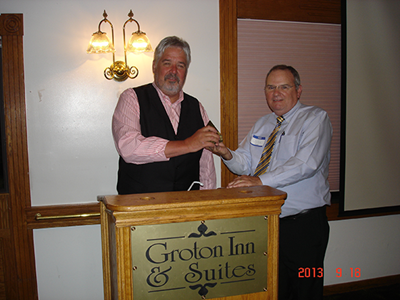 Fourteen of the Greater Houston Section’s board, committee chairs and members met at Brady’s Landing on 11 September for an executive committee meeting. Section Chair Jeff Wagner presided over the meeting. During the meeting, a review and approval of August’s meeting minutes and treasurer’s report were concluded, followed by standing and board committee reports presented by the appropriate committee chairs. The main topics of discussion were the 2013–2014 program committee schedule, golf outing, new t-shirt design, attendees to the ASNT Annual Conference in Las Vegas, Nevada and the Section membership milestone of 1000 members.

Following the executive committee meeting, 92 members and guests attended a social hour and dinner, where all enjoyed the first meeting of the year. During the dinner, door prizes were awarded. The door prizes were donated by DTM Enterprises and the September meeting sponsors: AIP; NDS Products; NDT Seals, Inc.; Olympus NDT, Inc.; PH Tool Reference Standards; and Turbo Nondestructive Testing, Inc. At the conclusion of dinner, Becky Judkins and Skip Hoyt presented the golf outing’s Platinum Sponsorship Award to David Thigpen, of Mistras Group. The golf outing raised $19 716, which was presented by Skip Hoyt, John Sellers, Becky Judkins and Jeff Hocker to the Section to benefit the scholarship fund. The announcement of the new Jerry Fulin Technician of the Year award was made in Fulin’s honor. This award of a $2500 scholarship for advanced nondestructive testing training will be given to the Technician of the Year. Houston Rapid Transit – Joint Venture (HRT-JV) was kind enough to present the details and accomplishments of the new light rail transit corridors. The presenters for HRT-JV were Gary Brown, Dora Terry and Jim Holt. Appreciation awards were presented following the presentation.

The Hampton Roads Section met on 24 September at the Peking International Buffet, with Regional Director William Via as the speaker. There were 10 members and a guest in attendance. Via, of the Virginia Department of Transportation, provided an interesting presentation on the Midtown and Downtown Tunnel Expansion Project. The presentation highlighted the methods of manufacturing the tunnel sections, the placement of the sections and the infrastructure that will be in place at the conclusion of the project.

This was a special meeting since it began the 50th year of the Section. The meeting was extra special with the attendance of Via, who was an early member of the Section and has been a longtime supporter. 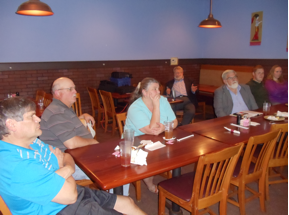 Members of the Hampton Roads Section gathered in September for a presentation by Regional Director Bill Via.

After almost two years of inactivity, the New Orleans Section held its first meeting on 19 September, at Boomtown Casino in Harvey, Louisiana. The Section hosted 58 members and guests, all of whom were happy that the Section was back in business. The first meeting was sponsored by MFE Rentals, of Baton Rouge, Louisiana, as well as several locations in Texas and California. The first speaker of the new year was Jimmy Veillon, of Phillips 66 Alliance Refinery, who gave a well received presentation regarding corrosion under insulation (CUI) and external inspection challenges. Attendees learned of the modes of CUI, telltale signs of its presence, inspection techniques to find and quantify it, and measures that can be taken to prevent or lessen it in the first place. Finally, Topher Smith, of Sentinal QSA Global, Inc., won $132 in the 50/50 drawing.

The North Texas Section met on 19 September at Pappadeaux Seafood Kitchen in Fort Worth, Texas. There were 59 members and guests present to hear the Section’s membership officer, Ernie Vandergriff, give an exciting presentation on the new direction of the Section and its methods to meet the needs of the nondestructive testing (NDT) society in North Texas. Vandergriff detailed future expansion plans; service of the NDT community; plans to be much more influential in North Texas, provide technicians with encouragement, and assign people to call for assistance; and ideas for training and training scholarships. In addition, the Section plans to initiate tabletop equipment demonstrations and more equipment information, as well as invite more technical presentations and increase the synergy of technical aspects for Level IIIs from primarily aerospace to the petrochemical and commercial NDT industry. It was an exciting meeting and, with 59 people present, showed that interest is definitely on the increase. 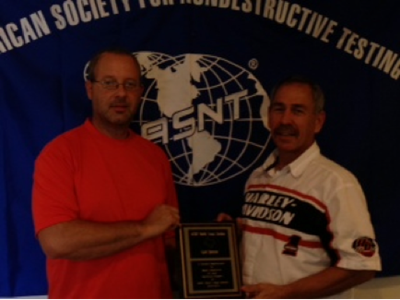 The OKC Section met on 25 September. Michael Tomasch, Craig Gray and Dianne Hillhouse, from Olympus NDT, Inc., were on hand to speak about X-ray fluorescence for positive material identification.

Section Chair Walter R. Matulewicz presided over the meeting, which was attended by 11 Section members and 4 guests. Prior to the meeting, the Section spoke briefly about its 501(c)(6) application status, which was to be completed soon. 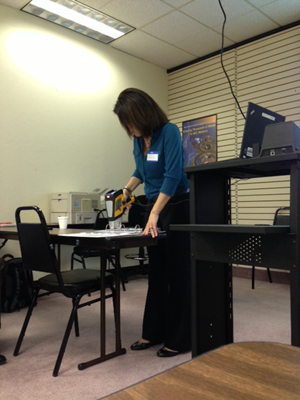 Dianne Hillouse, of Olympus, was one of three presenters at the OKC Section meeting.

The Old Dominion Section had its first meeting of the year on 23 September at the Italian Kitchen in Mechanicsville, Virginia. There were 14 members who attended, including Regional Director Bill Via. After coming off Gold Level standing in the President’s Award Program, the Section started off the year right with a technical meeting. This month’s speaker was past Chair Thomas Darby III, a professional engineer with the Virginia Department of Transportation (VDOT). Darby’s presentation was on the Elizabeth River Tunnels Project in conjunction with VDOT, which has been working to bring an efficient, linked transportation network to the Hampton Roads area. Although Virginia has multiple tunnel systems already in place, this will be the first to use concrete as the main structural element.

Originally, incoming ASNT President Roger Engelbart was going to speak this month but had to withdraw at the last minute because of a work conflict. Engelbart expressed his apologies and was going to try to make a meeting later on in the year. 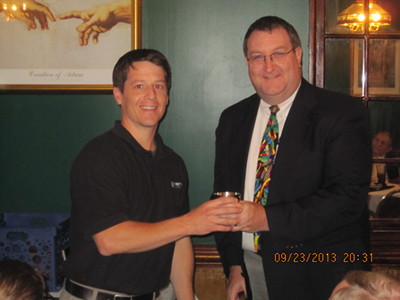 The San Diego Section hosted a meeting on 3 September, at the Best Western Seven Seas hotel. There were 25 members, guests and vendors in attendance. The guest speaker was Fred Hall, vice president of Anatec-LMT, a business unit of Curtiss-Wright Flow Control Corp. Hall gave a very informative presentation on the development and application of encoded phased array ultrasonic testing (PAUT) of socket-welded joints. Current U.S. regulation requires periodic testing of installed socket-welded joints for nuclear plant life extension or license renewal. Typically, these joints are either radiographed or destructively tested for evidence of cracking from the root of the joint. To reduce the outage impact, radiologic concerns and costs associated with radiography or destructive testing, Anatec-LMT developed a technique to test these joints using encoded PAUT. Hall described the development of this technique, including performance demonstrations, and described the PAUT applications at U.S. nuclear power facilities.

The Saudi Arabian Section held its third technical dinner meeting for the fiscal year 2013–2014 on 16 September at the Carlton al Moaibed Hotel in Al Khobar, Saudi Arabia. The Section-sponsored meeting was attended by 115 members and guests.

Section Vice Chair Fathi E. Al Qadeeb inaugurated the meeting and started with a warm welcome to everybody, including the sponsor company, Pan Gulf Welding Solutions. He elaborated on some of the announcements, especially the Section Level III Exams, which were held 26–27 October. He also announced a short course called “Projector Maintenance,” which was set to take place 17 November, and another called “Emergency Source Retrieval” on 19–21 November.

After the announcements, Al Qadeeb invited the guest speaker, Paul C. Trigg, general manager from Callington Haven Pty., Ltd., to start his presentation on the subject, “Dubl-Chek and Improve Your Ability to Detect Defects.”

After the presentation, the usual and question and answer period was conducted, and an appreciation plaque was given to Trigg. During the last part of the meeting, door prizes were distributed to the lucky winners whose names were drawn in the raffle. Afterward, all in attendance enjoyed a dinner served by the Carlton al Moaibed Hotel. 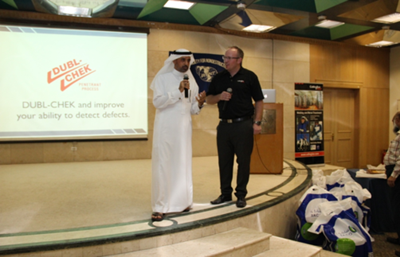 Once one of the more active ASNT sections, the New Orleans Section, which locally refers to itself as the Crawfish Section, has started back up. The first of hopefully many meetings to come included a technical presentation and prize drawing. 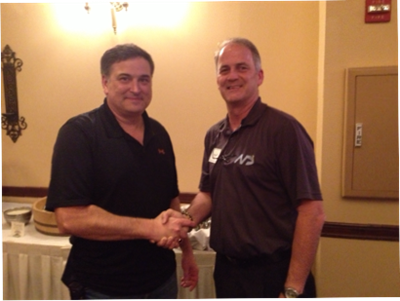