Nine members of the Greater Houston Section’s board and committee chairs met at Brady’s Landing on 10 August. Section Chair Jeff Wagner presided over the meeting, which included reviews of the treasurer’s report, financial audit report, website, 2013 golf outing, scholarship awards and technician of the year, as well as new and old business. The main topics of discussion were the addition and improvements to be made to the scholarship awards and new approaches to the awards given to the technician of the year. The evening presentation was given by Teddy Levron about the possibilities of videotaping the presenters at the monthly Section meetings and posting them to the Section website. A group of members in Freeport, Texas started operating with the help of the Greater Houston Section; their first meeting was held on 23 July. Board Chair Mike Oden encouraged all member of the Section to attend. The meeting was adjourned and followed with open discussions during dinner.

The OKC Section had a meeting on 20 August, presided over by Section Vice Chair Mark Stowers. Ten members and two guests were in attendance for a presentation by Tommy Boyers, of Sonatest, regarding the Veo and Prisma instruments for ultrasonic and phased array testing. The Section had a rigorous question and answer session and hands-on demonstration period directly following the presentation. The meeting lasted 90 minutes and adjourned after Section business was addressed, including the status of the Section’s 501(c)(6) application and an appeal for officer volunteers. 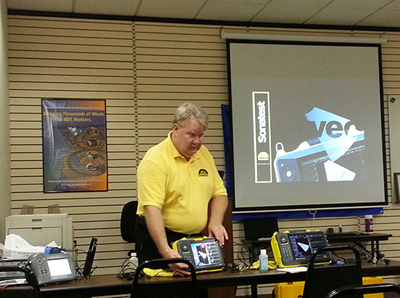 The August meeting of the OKC Section included an instrument presentation by Tommy Boyers, of Sonatest.

The Saudi Arabian Section held its second technical dinner meeting for the fiscal year 2013/2014 on 26 August at the Carlton al Moaibed Hotel in Al Khobar, Saudi Arabia. The Section-sponsored meeting was attended by 86 members and guests.

Section Chair Mohammad A. Abu Four began by welcoming attendees. He then made announcements, including a reminder about the Section Level III exams, which were held 26–27 October. Abu Four also announced that there were short courses being planned on the topics of “Projector Maintenance” and “Emergency Source Retrieval.” A course on radiologic testing film interpretation was conducted on 31 August.

After announcements, Abu Four invited Section Vice Chair Fathi E. Al Qadeeb to start his program on “Eid Celebration Fun with NDT.” Al Qadeeb started by asking participants to break into groups of seven, for a total of 13 tables. He then asked the each table to “knowledge share” and prepare at least three phrases or good things to say about nondestructive testing, and gave everyone 10 minutes to prepare their answers and choose a representative. Al Qadeeb appointed one of the board members to judge the answers, which were rated from excellent through fair. Participants were then invited to choose prizes based on their rankings.

After the prize distribution members enjoyed a buffet dinner served by the Carlton al Moaibed.

Combining fun and education, the Saudi Arabian Section came up with a game in which participants vied against one another using facts about nondestructive testing, thereby fostering an enjoyable learning atmosphere that all members could benefit from. 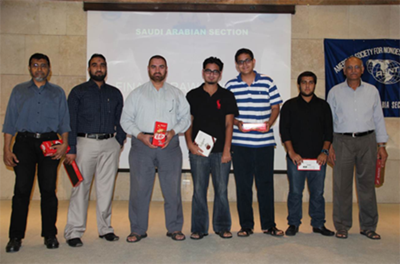