The Arizona Section held a meeting on 15 May with 13 members in attendance. Guest Speaker Shawn Jefferds, of Mistras Group, Inc., delivered a presentation on “Acoustic Emission, Its Past and Future Uses on the San Francisco-Oakland Bay Bridge.” Jefferds demonstrated several applications where the technology saved millions of dollars and has prevented catastrophic failure of critical infrastructure. 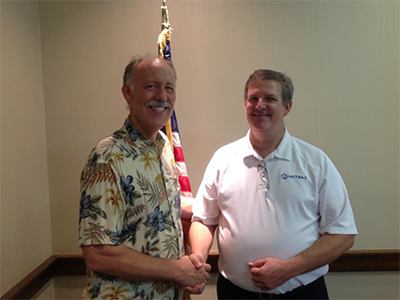 The Central Ohio Section held a meeting at ASNT headquarters in Columbus, Ohio on 27 May. There were 10 members, guests and vendors in attendance. David Kemp gave a presentation on “Finite Element Analysis and Computer Modeling Applications for Fitness for Service Assessments.” Kemp joined DNV GL in 2012 as part of the Computational Modeling Group. He has been working on finite element analysis (FEA) largely associated with mechanical and thermal induced stresses for components and applications related to the oil and gas industry, as well as performing heating, ventilation and air conditioning (HVAC) induction and mitigation modeling for transmission pipelines located nearby HVAC power lines.

Kemp presented a summary of DNV’s approach and experience on advanced computer modeling and simulation to perform fitness for service assessments and corrosion mapping for a variety of industry components. He also presented some of DNV’s recent case studies dealing with FEA and computer modeling. After the presentation, Kemp received a gift certificate from Section Chair Brian Frye. The Section would like to thank Kemp for this knowledgeable and interesting presentation. The vendor for the evening was DNV GL. The Section would like to thank DNV GL for its continued support. 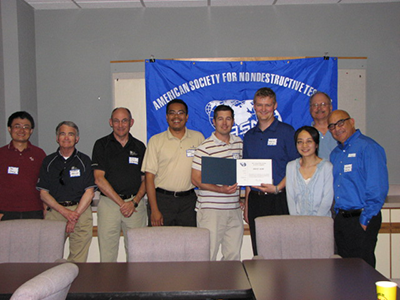 The Central Ohio Section met in May for a presentation on computer modeling applications.

The Greater Houston Section’s May meeting was held at Brady’s Landing and had over 70 guests and members in attendance for its annual Captains of Industry Night. Prior to the evening’s presentation, the Section conducted an executive committee meeting where 12 committee members attended. The meeting was called to order by Jeff Wagner and special committee issues were addressed along with the approval of the prior meeting minutes and treasury reports.

This year’s Captains of Industry Night featured nondestructive testing training experts who answered questions from attendees that were presented by this year’s Section Technician of the Year, Tim Reedy, of Turbo Nondestructive Testing, Inc. This year’s Captains of Industry were Don Locke, president of Hellier; David McGrath, of DTM Enterprises; Don Fast, of the Ocean Corporation; Paul Marks, of NDT Training & Testing Center; and David Steinke, of WorldSpec Group.

The ASNT Mentoring Award was presented during the meeting to the most deserving Section member, Deal Moore, of NDT Seals, Inc. Moore works as a volunteer behind the scenes for the Section and is a priceless asset to the Section.

The new Section website is up and is a vast improvement over the Section’s previous website. The Section encourages everyone to please visit the site for information on upcoming events, and would appreciate any feedback. 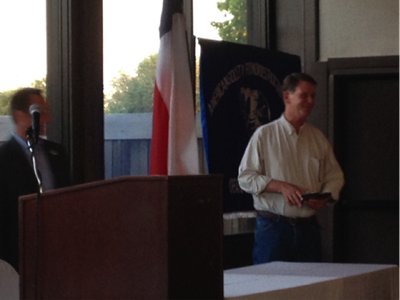 The Hampton Roads Section held a joint meeting with the Old Dominion Section in May, consisting of a plant tour at Catalina Cylinders, located in Hampton, Virginia. The tour was lead by Plant Manager James Goodill. Goodill took the group through the plant, where they extrude high and low pressure cylinders from cut aluminum bar stock. Twelve members and guests were present for the tour.

The Hampton Roads Section ended its 50th year with an annual golf tournament in June. Twelve teams played, with the last place team receiving a round of free golf. After golfing, everyone gathered at the plantation house for lunch, prizes and a raffle. There was a tie for first place at 15 under par. Thanks go to the Section’s sponsors and the effort of Tournament Director Phil Britton for the event’s success. 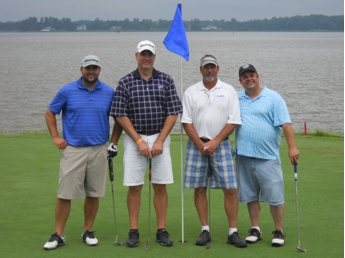 The ninth and final technical meeting of the 2013–2014 program year of the Pacific Northwest Section was held on 12 May at Vino at the Landing in Renton, Washington. Tim Burkholder, of Mistras Services Division, gave an energetic presentation on “Efficiencies in NDT.” Thirty-two members and guests joined Burkholder for dinner.

Ten of the new student members from Clover Park Technical College (CPTC) joined student Scott Marczinski as he accepted a $1000 scholarship from Section Scholarship Chair Chris Black, a part-time instructor at CPTC. The year-end attendance incentive drawing was won by Emery E. Roberts. It was announced that Section member Jeff Siegel had been accepted into the ASNT 2014 class of Fellows, and Roberts had been awarded the Charles N. Sherlock Meritorious Service Award for 2014.

Each member who signed the guestbook was eligible for a year-end drawing where $30 per meeting was accumulated. The more meetings one attends, the higher the chance of winning. The winner must be in attendance at the last meeting of the year.

The year-end attendance incentive drawing was held, and the first name drawn was Bill Meade. Since Meade was not in attendance at the meeting a second name was drawn for the $240 prize. Roberts’s name was drawn and he was present to collect the check from Treasurer Trey Gordon. Elections for the 2014–2015 officers were also conducted. A tally of valid website ballots and ballots of the attending members indicated that 84% of those in attendance voted to accept the slate of proposed officers as presented on the Section website at www.asntpnws.org. 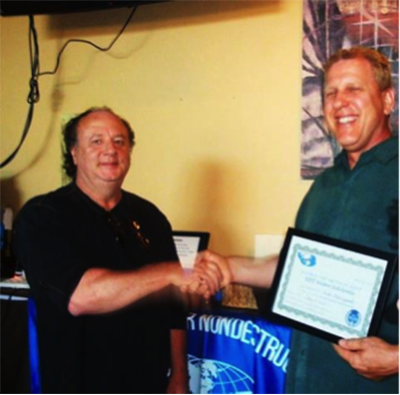 The Pittsburgh Section’s educational seminar on “Visual Testing,” presented by George Maksin, of George Consulting Services, Inc., had six in attendance. Maksin’s many years of experience along with a PowerPoint presentation were very informative. An eight-hour seminar, on 15 May, was held at TÜV in Moon Township. Dinner at Trenney’s Grille followed the seminar.

On 21 June, the San Diego Section hosted a change of gavel meeting at the 94th Aero Squadron, in San Diego, California, with 14 members and guests in attendance. The speaker for the meeting was Section Chair Larry Olsen. The focus of the talk was the 2013–2014 year in perspective for the Section. Points included the success in how the Section served the membership as well as opportunities for improvement. It was also mentioned that Section business does not stop or restart; it must be continuous. The new Section’s board of directors has several challenges to maintain that same continuity for the membership.

Olsen thanked the Section officers and board of directors for their participation in making 2013–2014 a successful year. He then provided awards for the officers and board members. In a past tradition that had been forgotten, the past chairs were given their own personal gavel as a token of their service. Olsen then issued a personal gavel to Denise McKay for her valuable service as chair (2007–2008, 2009–2010 and 2011–2012) and to Hans Weber (2012–2013). A good time was had by all in attendance.

The Saudi Arabian Section held its 12th technical dinner meeting for the fiscal year 2013–2014 on 16 June at the Carlton al Moaibed Hotel in Al Khobar, Saudi Arabia. The Section-sponsored meeting was attended by 143 members and guests.

Section Vice Chair Fathi E. Al Qadeeb started the meeting with a warm welcome, and then made announcements, with a mention of the Level III exams to be held in Saudi Arabia in October.

After the announcements, Al Qadeeb invited Region 19 Director Marwan F. Basrawi to speak about the progress of the Region. Basrawi went over a few slides and compared all of the sections in Region 19.

After the Section overview, Al Qadeeb took time to recognize the six sponsored companies that participated during the program year. Representatives from the sponsored companies were awarded trophies. Al Qadeeb then recognized the top 15 most active members, who attended 10 to 12 meetings during the 2013–2014 year. He also presented a trophy to Abu Four, the outgoing section chair.

Members were given annual awards during the last part of the meeting, and then both members and guests enjoyed a buffet dinner served by the Carlton al Moaibed Hotel. 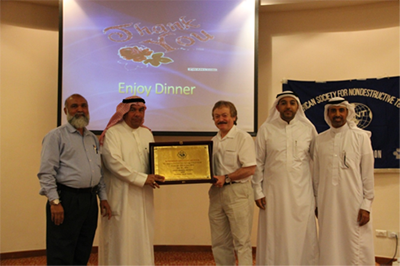 The Southern Africa Section had its annual general meeting at Willow Park Conference Center on 28 May. The evening was well attended and a great success. A number of special guests were invited.

It was a memorable occasion as Regional Director Mark Ormrod was present with his wife, Cath Ormrod. Mark Ormrod gave a presentation on “Phased Array on Wind Turbines,” which was very interesting, especially the photographs of the nondestructive testing technicians working 70 m (230 ft) in the air. Guests also enjoyed a presentation by Guillaume Neau, of M2M, on the latest phased array equipment. It was altogether an international evening.

Last year’s committee members were all nominated again for the 2014–2015 year because they all did a splendid job previously. They are all geared up for the celebration that is being planned for the 20th anniversary of the Section in 2015.

Section members met again on 18 June, this time at the School of Applied Non Destructive Examination, in Boksburg, for an interesting presentation given by Brian Kubeka and Bennie de Swart, from Steel Test Pty., Ltd., on “Remote Field Testing.” There was a wonderful turnout despite the bitterly cold weather. The spicy pizza helped to warm everyone up before the meeting began.

The Section joined together with the South African Institute for Non-destructive Testing for this event. It was a great success.

The Southern Africa Section met at the end of May for a general meeting, which included technical presentations on phased array and Section committee nominations. 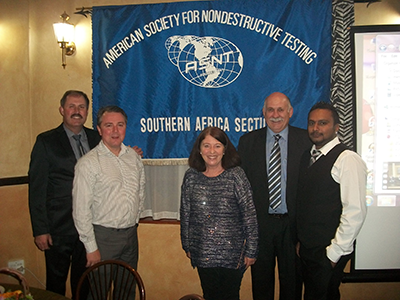