The Arizona Section meeting on 17 April had a very good turnout, with approximately 25 members. Kyle Lopez, a nondestructive testing (NDT) engineer from Honeywell Aerospace, gave a technical presentation about new and emerging NDT techniques including vibrothermography, computer-aided detection radiology and some other advanced techniques. It was a bit intense in the math sections but was well received overall. As always, the Section extended a year subscription to Arizona Highways to the speaker. This meeting was considered a precursor to an upcoming Honeywell tour to actually show and demonstrate the advanced techniques noted. The Section also invited the regional director, Dave Mitchell, to the meeting, and he was more than pleased to come to the event. 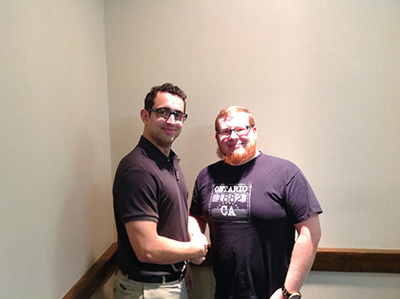 The Central Ohio Section took a field trip to the Mistras Group facility in Heath, Ohio, on 20 March. Regional Manager Tim Emmenegger and General Manager Brian Frye, of Mistras Services Division, hosted the Section. There were 15 members, students and guests in attendance. Emmenegger gave a presentation on “Introduction to Mistras Heath Facility Projects and NDT Applications,” a brief overview of nondestructive testing (NDT) inspection methods used at Mistras Heath. The presentation included an introduction of Mistras Group, its laboratory and testing facilities, and NDT inspection techniques used at Mistras, as well as a lab tour conducted by Frye. Mistras operates a 9290 m2 (100 000 ft2) facility in Heath. The Heath office specializes in conventional NDT methods and techniques such as ultrasonic, radiographic, magnetic particle, dye penetrant, eddy current and visual testing. All services are offered in-lab as well as at customer locations. The Heath office also specializes in advanced methods and techniques, such as ultrasonic C-scan, phased array, computed radiography, magnetic flux leakage and positive material identification. An in-house training facility provides classroom training in accordance to SNT-TC-1A, CP-189 and NAS-410 guidelines.

Congratulations to Frye, Bahman Zoofan and Jim Worman, who won door prizes (annual golf outing tickets) at this meeting event. The Section would like to thank Emmenegger and Frye for this informative and interesting presentation and lab tour, as well as Mistras Group for its continued support. 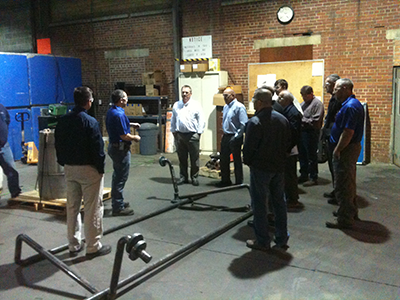 Members of the Central Ohio Section took a field trip to Mistras in March. 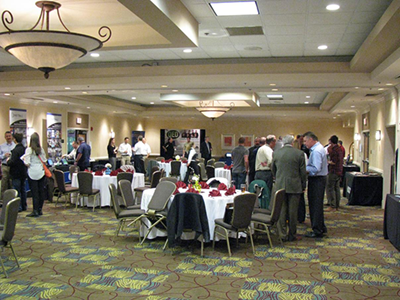 Members of the Greater Philadelphia Section met at the beginning of April for a Vendor Night.

On 11 February, 40 members and guests were in attendance at LaMirage Restaurant in Rolling Meadows, Illinois for a joint meeting of the Chicago Section and the Chicago Chapter of ASM International. The speaker for the evening was Jennifer Anaya, of Alloyweld Inspection Co., Inc., in Bensenville, Illinois. Anaya is a Level III radiographer with over 30 years’ experience in film and digital radiography. Her presentation was titled “CT-101.” It concentrated on the basics of industrial computed tomography. Anaya described the process and steps necessary to produce 3D images using X-rays. She highlighted the necessary calibrations, frame rate, and gains and offsets that have to be achieved to control the quality of the images obtained and to ensure accurate reconstruction of the images. Some of the process controls described were signal-to-noise, contrast-to-noise, spatial resolution, dead and bad pixel mapping, and monitor quality and brightness. She then displayed a number of case studies and images that were obtained, using both still shots and videos. 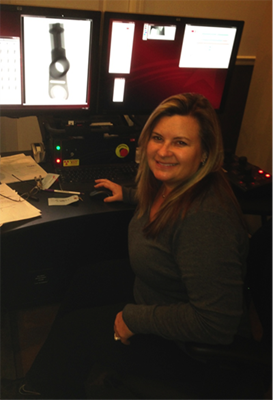 Guest speaker Jennifer Anaya presented at a joint meeting between the Chicago Section and the ASM International Chicago Chapter.

On 8 April, the Hampton Roads Section met at the Peking International Buffet restaurant. Eleven members and guests attended the meeting. Richard Mills, radiography technical support manager for GE, provided an interesting presentation on “New Developments in Digital Radiography.” The presentation was both educational and beneficial and held everyone’s interest. It provided an insight of digital radiography for the members and guests who were unfamiliar with the technique and an update for those who use the technology. 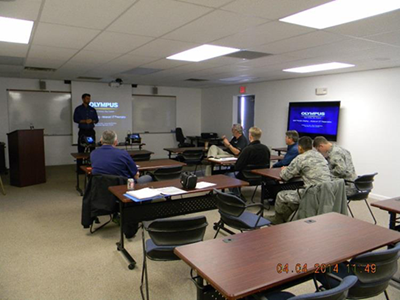 Trevor Moore (standing), from Olympus, gave a presentation on phased array to the Los Alamos Section.

The Old Dominion Section conducted its sixth technical meeting of the planning year at the Italian Kitchen restaurant in Mechanicsville, Virginia. Twenty-six members and guests gathered for a business meeting and dining before listening to a presentation by Jerry Roddy, recently retired from the National Security Agency (NSA), concerning project GUNMAN where the NSA discovered that many electric typewriters in the U.S. Embassy in Moscow had been bugged. He went into detail about how the devices worked and the nondestructive testing techniques used in discovering the devices. He is only allowed to discuss these matters because the project was recently declassified and had to refrain from commenting on current stories about the NSA. The Section was especially pleased with the turnout and everyone commented on their interest in the topic.

Old Dominion Section guest speaker Jerry Roddy (left) received thanks from former Section Chair and Regional Director William Via, after Roddy’s presentation on nondestructive testing used to detect bugging of typewriters used at the U.S. Embassy in Moscow, with a sample electric typewriter on the table behind them.

To show appreciation for those who encourage members to attend the monthly meetings of the Pacific Northwest Section and keep abreast of changes in the nondestructive testing industry, a night out was arranged at a local comedy club. Appetizers were enjoyed prior to the show. Located in downtown Bellevue, Washington, the Parlor Comedy Club hosted a Valentine’s weekend with headliners comedian Jamie Lee (cast member of the MTV show Girl Code) and comedian Joe Derosa.

The Section will purchase up to five new one-year ASNT memberships for non-members attending a Section meeting. Andrew Smith, of Zodiac Aerospace, signed up as a new member in January, along with several others. Each member who signs the guestbook is eligible for a year-end drawing. 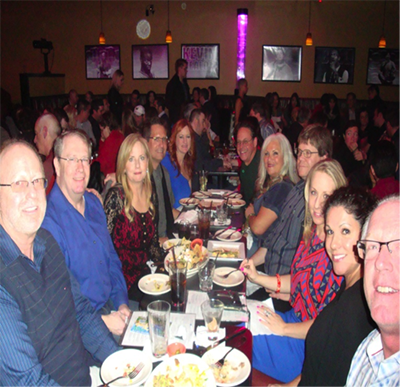 Members of the Pacific Northwest Section met in February at a comedy club.

On 1 April, the San Diego Section hosted a meeting at the Best Western Seven Seas hotel, with 17 members and guests in attendance. The guest speaker for the meeting was Stephen Senne, from Senne Technical Service. Senne maintains eight ASNT NDT Level III certifications. Senne’s presentation was on the history of space travel, from his experiences working on the Apollo program at various manufacturers in the Los Angeles area to today’s activities as a responsible Level III with several companies. The focus of the talk was on the space industry, including techniques, personnel education/certifications and actual hardware inspection. The Section wishes to thank Senne for his very interesting presentation.

The Saudi Arabian Section held its 10th technical dinner meeting for the fiscal year 2013–2014 on 14 April at the Carlton al Moaibed Hotel in Al Khobar, Saudi Arabia. The Section-sponsored meeting was attended by 85 members and guests.

Section Vice Chair Fathi Al Qadeeb inaugurated the meeting with a warm welcome to everyone. He elaborated on some of the announcements, including the Section Level III exams, which were held in April.

After announcements, Al Qadeeb invited Ryoichi Ishizuka, from Safe Inspection Technology, to start his presentation on the subject of “Examples of Trouble and How to Solve Them in RT Films.”

After the presentation, there was a question and answer session, and an appreciation plaque was presented to the guest speaker.

The last part of the meeting was devoted to distributing door prizes to the raffle winners. After the prize distribution, members and guests enjoyed a buffet dinner served by the Carlton al Moaibed Hotel. 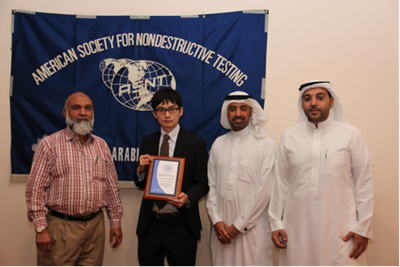 The April meeting of the Southern Africa Section took the form of a Golf Day at Benoni Country Club. It was a joint event with the South African Institute for Non-Destructive Testing (SAINT).

The day was very well attended by the nondestructive testing fraternity, and spirits were high. Luckily, the weather was good after weeks of almost torrential rain. The event was originally planned for March, but the course was flooded.

Local industry was generous by donating prizes, and the Section, together with SAINT, provided a great selection of wines and other prizes, making sure that all players went home with a handful of gifts, including a special ASNT/SAINT Golf Day cap to commemorate the day.

As the event was such a success it will be repeated in 2015. 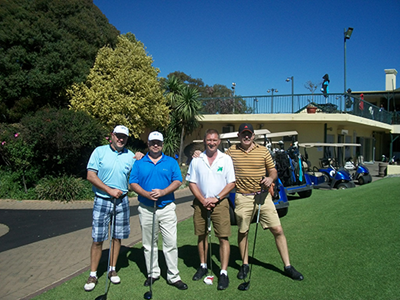 Aerospace is one of the main industries that uses nondestructive testing (NDT) on a regular basis. The Lewis & Clark Section took advantage of the opportunity to tour Columbia Helicopters, a company that operates and maintains small aircraft and components, and see the various measures that go into routine quality assurance and overhaul. 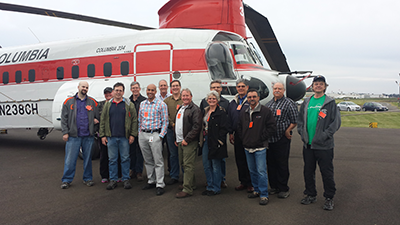 Members of the Lewis & Clark Section took a tour of Columbia Helicopters in April.