The Central Ohio Section held a meeting at ASNT Headquarters in Columbus, Ohio on 16 January. There were 14 members, guests and vendors in attendance. Karl Schmidt, defense applications program manager of Evisive, Inc., gave a presentation on “The Basics of Microwave NDE Technology.” This unique nondestructive testing (NDT) technique was initially developed to inspect dielectric materials such as rubber expansion joints and fiberglass reinforced piping. Once the technique was patented, Evisive was founded and has refined the equipment and techniques. The Evisive microwave NDT technique is currently applied to a wide range of dielectrics, including reinforced rubber; high density polyethylene butt and electro-fusion joints; other plastics, ceramics, and organic and ceramic composites; and other advanced materials. It is currently in use worldwide and is becoming a preferred NDT technique for a wide range of dielectric materials. Evisive microwave inspection techniques are in the process of incorporation into ASNT and ASTM International.

Members and guests of the Central Ohio Section convened in January for a presentation on microwave inspection.

The Charlotte Section, in cooperation with the North Carolina Student Section, held a “Radiographic Film Interpretation” class on 18 January, in the Central Piedmont Community College (CPCC) Surface Testing Lab. Sixteen members attended the class, which was sponsored by Detek, Inc. and GE Measurement & Control. It was taught by Rand Ernst, ASNT NDT Level III in RT, ET, MT and PT, who is one of the three instructors at CPCC. Also in attendance were four students from the Nondestructive Examination Technology (NDET) A.A.S. program at CPCC, including Student Section Chair Rod Stephens and Secretary Rogerio Carvalho. The class began with introductory comments by Charlotte Section Chair Don Duncan, of U.S. Airways, Inc., and NDET Department Chair Dick Hooper. Lunch was provided by GE Inspection and Measurement. Reference radiographs were provided by GE Inspection Technologies, Sonaspection International, Inc. and HMT Inspection. Special thanks go to U.S. Airways and Roy Duce, of Sonaspection, for the use of film viewers, and to Rudy Paillaman, for his presentation on the radiography of castings. The Student Section would also like to thank the Level IIs and Level IIIs attending the class for sharing their knowledge and wisdom.

Twenty members and guests attended the Connecticut Yankee’s Section meeting at the Groton Elks Lodge in Groton, Connecticut, on 15 January. Lissa Quinlan, president of Quinlan Companies, shared information on Quinlan’s services and how it can partner in offering scanning of medical, legal or business documents and X-ray film, as well as silver recovery and film reclamation services. Section Chair John Moran, from Doncasters Precision Castings, shared a presentation to the group that told the history of the organization and how it was started by Quinlan’s grandfather, Aubrey Quinlan, and great uncle, Clark Quinlan. Quinlan Companies first began in 1932 as an X-ray film reclamation company called Safetyloid, with the focus of reclaiming the plastic from film, which was then stripped and dyed and made into menu covers, wallet picture holders and pinwheel novelty items.

The need for digitization, DICONDE, DICOM, what digital X-ray covers and challenges for the future were discussed. The chair reviewed the list of awards that ASNT presents each year and the need to submit nominations by the deadline. The Level II Beta exams were presented, and several members showed interest. 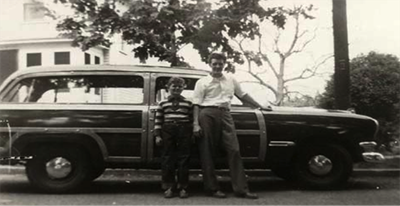 A photo from 1950, showing Tom Quinlan (left) and his father Aubrey Quinlan, was part of the Connecticut Yankee Section meeting. Aubrey Quinlan was one of the founding members of a company that reclaimed the silver from film while retaining the plastic to make pinwheels and menu covers.

Fourteen members of the Greater Houston Section’s board, committee chairs and members met at Brady’s Landing on 8 January for the first executive committee meeting of 2014. Section Vice Chair John Chen called the meeting to order. During the meeting, a review and approval of the November treasurer’s report were concluded, while the November meeting minutes were set to be reviewed during the February meeting. The Standing Committee reports were addressed with the main topics of the Spring Educational Seminar, Membership Committee report and several additions that have been nominated to next year’s Section Executive Committee, along with local and national awards nominees.

Following the adjournment of the Executive Committee meeting, 54 members and guests attended a social hour and dinner. Following dinner, Brad Hoskins, of Silean, presented the advantages of proper radiography film recycling, which include archive costs and possible revenue while minimizing litigation and negative environmental exposure. 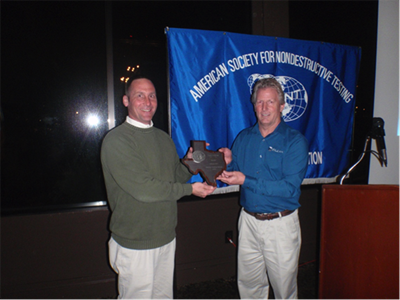 Jeff Wagner (left) and Brad Hoskins, of Silean, during the January meeting of the Greater Houston Section.

Nineteen members and guests of the Greater Philadelphia Section attended the 5 December meeting held at the Crown Plaza Hotel in Trevose, Pennsylvania. Guest speaker Hira Ahluwalia presented on the topic, “The Cost of Corrosion to Society.” Ahluwalia is president of Material Selection Resources, Inc. (MSR). MSR is a materials engineering and corrosion consulting organization based in New Jersey, serving the chemical, pharmaceutical, fabrication and metal industries.

According to a survey by the National Institute of Standards and Technology, corrosion costs U.S. industry 4.2% of the gross national product value. This means the direct costs – replacement and cost of corrosion protection – are approximately $400 billion annually. In more comprehensible numbers, the cost is more than $1000 per person each year. It is estimated that at least one-third of the cost is entirely unnecessary. Metals corrode for different reasons, each with its own mechanism. During the presentation, Ahluwalia discussed corrosion of systems such as bridges, buildings and pipelines that have an effect on safety.

The Section congratulated Arlene Bottari for winning $35 in the 50/50 drawing, and Dave Crosson, who won the $25 bonus prize. Joel Muzik’s name was drawn, but he was not present for the progressive drawing; the pot went to $150.

The Kuwait Section had its monthly meeting on 26 January at Winner’s Restaurant, with 15 Section officers in attendance. The session began with the agenda and the welcome address was given by Section Chair Nayef Al-Enezi. He highlighted Section achievements for the attendees.

The following points were brought up. First, Beta examinations of ASNT NDT Level II (five methods) for Section officers were discussed. The majority of the Section officers are already qualified as ASNT NDT Level III, so it was decided not to participate in the Beta examinations. Second, enrollment of new members was discussed. It was decided that the Membership Committee should intensify its activities. Next, members discussed the annual conference and seminar on nondestructive testing, to be conducted by the Section in Kuwait sometime in November. Finally, all Section officers were requested to plan and come back with proposals.

The event concluded with a dinner. 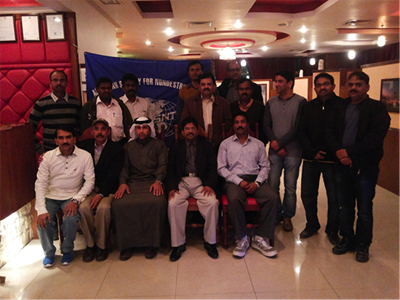 Section officers of the Kuwait Section gathered for a meeting at the end of January.

Thirty-four members of the New Orleans Section, along with their guests, met on 16 January at Smilie’s Restaurant. Among those in attendance, the Section welcomed David Mandina, national director at large, and Ricky Morgan, chair of the Board of ASNT.

The Section discussed business, such as the upcoming 11th Annual Big Bang NDE Workshop, to be held at Source Production & Equipment Co., Inc., as well as local and national awards, including Technician of the Year, Young NDT Professional, and others that could be bestowed upon members should nominations be made and criteria be met.

The speaker, Randall Bellard, of Bellard Consulting Services, spoke of his research into the efficacy of computed radiography in lieu of ultrasonic thickness testing. The talk was lively and inspired discussion among all in attendance. 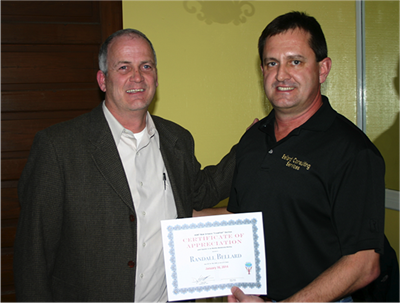 The Old Dominion Section held a meeting on 27 January at the Italian Kitchen. There were approximately 30 people in attendance, including Deonna Woolard and her students from Randolph-Macon College, Hampton Roads Section Chair Larry Stippich, and Regional Director Bill Via. The speaker was Arturo Nunez, substation reliability COE manager with Mistras Group, Inc.’s Princeton, New Jersey office. The presentation was on “Transformer Monitoring using Acoustic Emission.” Nunez described how acoustic emission testing is used along with other nondestructive techniques to evaluate power transformers in-service, allowing not only the detection of faults but also the location of discontinuities in 2D and 3D. 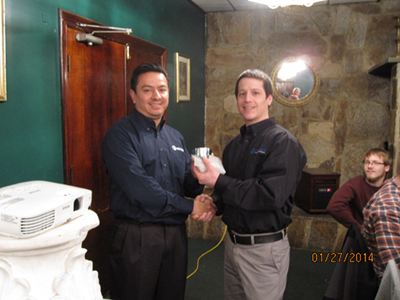 The first Pacific Northwest Section meeting of 2014 was held on 9 January at Razzis Pizzeria in Seattle, Washington. Zachary Schafrath and Matthew Dragon, of Hilti, Inc., presented a talk on “Ground Penetrating Radar: Pros and Cons.” Dragon gave demonstrations of Hilti’s ground penetrating radar unit to small groups prior to his presentation so that questions could be formulated for the presentation. Forty-seven members and students were present. Twelve students and instructor John Cale, from Clover Park Technical College in Tacoma, Washington, were also present. Food was served prior to the presentation. ASNT shirts and pen and pencil sets were presented to both presenters at the conclusion of the meeting. 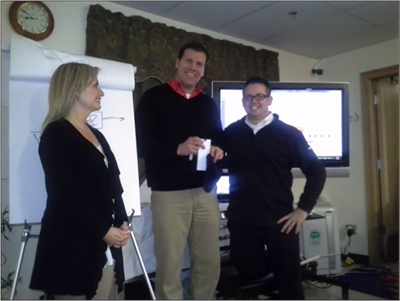 The San Diego Section hosted a meeting on 7 January at the Best Western Seven Seas hotel, with nine members in attendance. The scheduled guest speaker for the meeting was Duane Schultz, who was called away on business and could not attend. Section Chair Larry Olsen decided instead to hold a round-table discussion with those present. Topics included: what the Section can do for membership; where would members’ careers in nondestructive testing be without ASNT; and Section strategic planning for the future. Each subject brought about intense discussions, with a strategic planning committee being developed.

The Saudi Arabian Section held its seventh technical dinner meeting for the fiscal year 2013–2014 on 13 January, at the Carlton al Moaibed Hotel in Al Khobar, Saudi Arabia. The Section-sponsored meeting was attended by 104 members and guests.

Section Vice Chair Fathi E. Al Qadeeb inaugurated the meeting and started off with a warm welcome to everyone. He elaborated on some of the announcements, especially the Saudi Arabian Level III exams in April. Those interested were instructed to contact Secretary of Membership/Chair of President’s Award Program M.J. Anjum for more details.

After the announcements, Al Qadeeb invited Oliver Ruzek, the managing director for Dürr NDT, to start his presentation on “Latest Developments in Computed Radiography.”

After the presentation, there was a question and answer session, and Ruzek received a plaque of appreciation. During the last part of the meeting, winners were drawn for the door prizes. After the raffle distribution, members and guests enjoyed a buffet style dinner served by the Carlton al Moaibed Hotel. 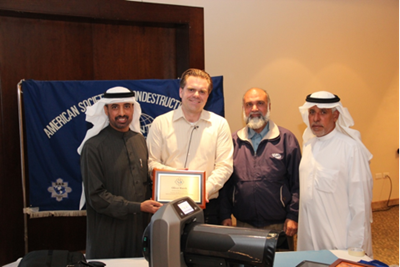 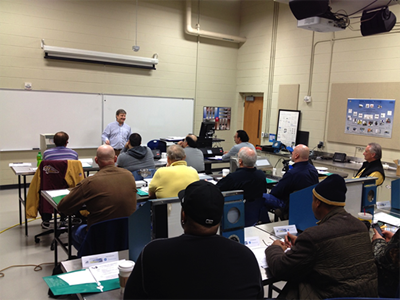 The Charlotte Section, in conjunction with the North Carolina Student Section, held a course on radiographic film interpretation in January.