The attending BOD and committee members were taken on a tour of the Hotel Icon for consideration of this venue for upcoming Section meetings. Michael McVey, senior catering sales manager with Westmont Hospitality for Hotel Icon, led the tour and presented the hotel and the upcoming meeting space and described the advantages to the amenities the hotel meeting spaces had to offer. It was decided that the Section’s September, October, and November meetings would be held there.

The India Section met on 21 July for a presentation by B. Venkatraman, of the Indira Gandhi Centre for Atomic Research. The presentation was a plant visit, titled “Enhancing Safety Through Robust NDE.” There were 40 members in attendance. 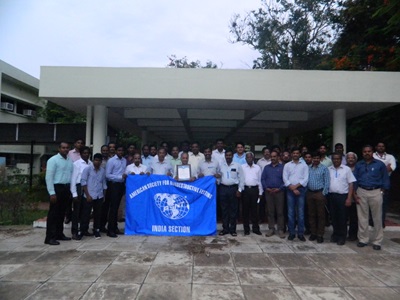 The India Section met on 21 July, with 40 members in attendance.

Over pizza and drinks, they further explained the benefits of the group and the importance of networking in the industry. Attendees also discussed the ninth annual George Pherigo Memorial Golf Tournament, held on 22 September. Everyone’s support for this event was greatly appreciated because it helped with travel expenses to the ASNT Annual Conference in Long Beach, California.

After the meeting, student advisor Rand Ernst and lab facilitator John Burke, along with Walbert, Robinson, and Egan discussed privately how to restructure the Section to improve the system of communication along with plans of how to incorporate a platform that would provide marketing to supporting companies, announce outstanding students in the program, and grow the NDT program at CPCC for future students. 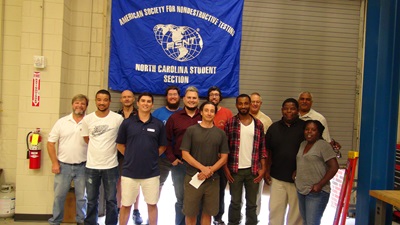 The initial meeting of the Pacific Northwest Section’s 2016–2017 program year was the annual golf tournament and barbecue banquet event held on 30 July at the Golf Club at Hawks Prairie, just North of Lacey, Washington. The tournament was a golf scramble with a shotgun start. For the non-golfer, this means that everyone starts at the same time, and individual skill level has little if anything to do with the outcome. In addition to having a good time, funds were raised for the Section’s nondestructive testing (NDT) student scholarship program. Two of the nine teams were from Clover Park Technical College, where a student has received a scholarship during the previous three years. The outing was a resounding success—once again thanks to a great team of volunteers. It was a beautiful day at the golf course, with perfect weather and 36 golfers. There were many awards given along with a raffle and prizes at the end.

The Section also thanks the event organizing committee, Director at Large Flynn Spears, Jeff Siegel, Kathy Ferguson, Luke Puckett, and Emery Roberts, for contributing so much of their time and energy towards making sure that this event went smoothly and that everyone had a good time. Special thanks go out to Dylan Thorp’s wife for running the putting contest and assisting Spears and Spiegel during registration/sign-in. 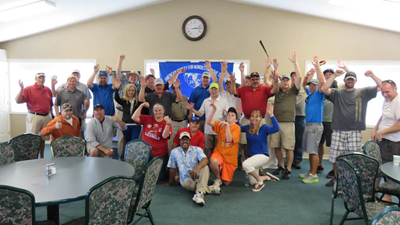 The Pacific Northwest Section golfers and organizers let off steam before ending the day.

The Piedmont Section held its annual golf tournament on 29 July, at the Willow Creek Golf Club in Greer, South Carolina.

The Saudi Arabian Section held its first technical dinner meeting for the fiscal year 2016–2017 on 18 July, at the Carlton al Moaibed Hotel in Dammam, Saudi Arabia. The Section sponsored meeting was attended by 105 members and guests, including guests from the Bahrain Society of Engineers.

Section Chair Abdullah Al Khalifah opened the meeting with a warm welcome and Section highlights, including the Level III exams to be held 2–3 December. After the announcements, Al Khalifah invited the guest speaker, Michael W. Schick, of Saudi Aramco, to start his presentation: “Part of the Solution or Part of the Problem.” The presentation was amusing and well received. After the presentation, Al Khalifah presented Schick with a certificate of appreciation, trophy, and gift voucher from SACO. At the end of the meeting, everyone in attendance enjoyed dinner at the hotel by the swimming pool.

The Saudi Arabian Section held its second technical dinner meeting for the fiscal year 2016–2017 on 15 August, at the Carlton al Moaibed Hotel. The Section sponsored meeting was attended by 55 members and guests, including guests from the Bahrain Society of Engineers.

Al Khalifah again inaugurated the meeting with a welcome and announcements. After the announcements, he asked the guest speaker, Fathi Al Qadeeb, to start his “NDT Quiz Night.” Following the quiz night, Al Khalifah presented Al Qadeeb with a certificate and trophy in appreciation. Afterwards, dinner was enjoyed by the hotel pool. 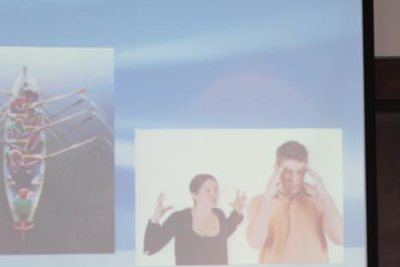 On 23 August, the Southern Africa Section held a technical information evening at the School of Applied Non-Destructive Examination in Boksburg, South Africa. Section Chair Simon Wilding presented on “Obtaining Recertification Points for ASNT Level III Personnel.” It was a very informative evening and everyone took part in the lively discussions. 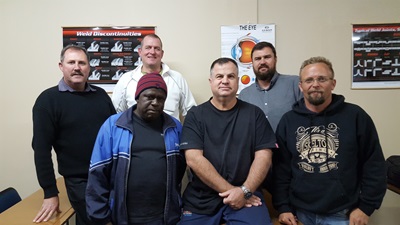 Section meetings are not all technical presentations and facility tours. Members also take the time to come together for recreational outings, as exemplified by the Piedmont Section’s annual golf outing. 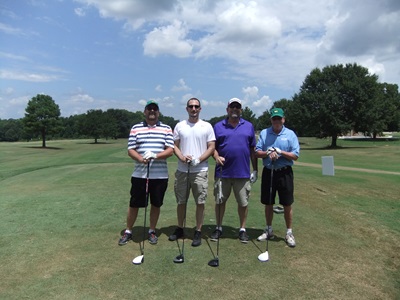 The Piedmont Section held its annual gold tournament at the end of July.