News items submitted by local sections for the month of March

The Chicago Section met on 9 January, with 19 guests and members in attendance at the Crazy Pour restaurant, in Villa Park, Illinois. The guest speaker was ASNT President David R. Bajula, of Acuren Inspection, Inc.

Bajula is an ASNT NDT Level III in all methods and has a number of other qualifications from other countries as well. His talk for the evening was “ASNT Initiatives for 2017.” One of the key areas that ASNT will be working on is the ASNT Central Certification Program. It is a goal to expand to meet the ISO 9712 requirements and provide for harmonization worldwide.

Bajula called for more participation from members and cited that there is a need to expand the core of individuals that comprise the committees, develop the examinations, and write the handbooks. He mentioned the various committees that members could become involved with and stressed the importance of new voices and perspectives throughout the Society.

Another area for development is providing performance-based examinations and an audit group that would oversee accredited companies under an ASNT program. Bajula is also promoting a “Level IV” certification. This certification would be based on a minimum 20 years’ experience of performing nondestructive testing in three industries and qualification by interview and questioning by an ASNT board of experts. The final topic Bajula discussed was the ASNT Center for Excellence, which would be open to industry use for training and ASNT/International Standards Organization accreditation.

The Greater Houston Section hosted 46 members and guests at its meeting on 11 January, at the Hotel Icon in Houston, Texas. Section Chair Tim S. Roach presided over the executive committee and business meetings.

The January speaker was James P. Scott, of SGS North America, on the topic of corrosion under insulation. The presentation detailed the types of issues that occur while detecting discontinuities, ways to prevent corrosion problems, issues with personal who are unaware that they may damage insulation during normal activities, and costs associated with the thermal losses that affect company profits.

Many thanks to Scott and the meeting sponsors, NDS Products and Oceanscan.

On 13 December, the Lewis & Clark Section held a meeting at Flying Pie Pizzeria, where Brandon D. Short made a presentation to eight attendees, in which he addressed the importance of pre-penetrant surface preparation. The presentation included descriptions of processes and photos to reinforce best practices. Test Equipment Distributors generously sponsored the dinner. 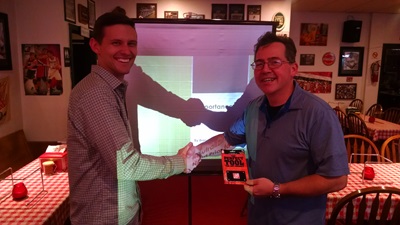 On 17 November, the Minnesota Section hosted a meeting at Curtiss-Wright | LMT Nuclear Division at the East Campus of Ridgewater College in Hutchinson, Minnesota. LMT delivered a presentation on “Advanced Phased Array Applications,” including a lab tour complete with hands-on phased array demonstration and scanning stations. More than 30 members and nonmembers including students attended the tour, which was followed by a meeting at Squeaky’s Restaurant and Grill for a social hour, buffet, and Section board meeting. 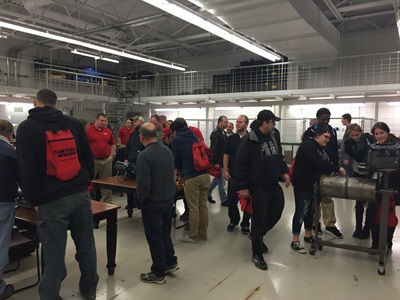 The Minnesota Section took a tour of the Curtiss-Wright Nuclear Division at the East Campus of Ridgewater College in November. The lab tour included a hands-on demonstration of phased array with multiple scanning station available.

The Mohawk Hudson Section’s 9 November meeting included a tour of the General Electric main plant, in Schenectady, New York, followed by a dinner at Katie O’Byrnes restaurant. Alexander Kurimsky, technical lead of the steam and valve assembly, coordinated the tour logistics. Alan A. Fijal, a manufacturing engineer at GE Energy, first gave a brief history of General Electric. Then, he gave an excellent walking tour of the turbine manufacturing and assembly in Building 273 of the GE main plant. He described their ongoing work, mechanisms/work involved, and nondestructive testing methods employed during the process for the quality control and quality assurance.

The Section’s 17 January meeting was a tour of Automated Dynamics. Automated Dynamics designs and manufactures composite parts for various needs. They offer a wide variety of shapes and sizes, including cylinders, cones, box beams, I-beams, coils, flat laminates, and complex geometries. The company also designs automation equipment for composite part production, and builds right-sized, automated fiber placement and automated tape laying equipment for thermoset and thermoplastic applications. The tour walked through the process of automated composite manufacturing. The tour was followed by a dinner at LT’s Grill. 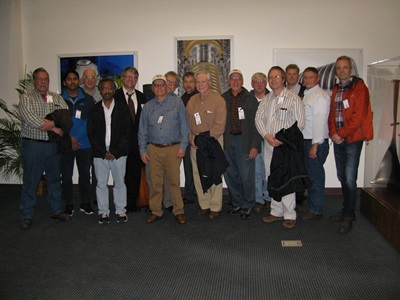 Sixteen members and guests of the Mohawk Hudson Section attended the 9 November tour of the General Electric plant.

The Northern New England Section held a reorganization meeting in Portland, Maine, on 17 January. The event included a presentation by ASNT President David R. Bajula, and covered other topics such as fundraising, officer positions, events, scholarships, and certification. 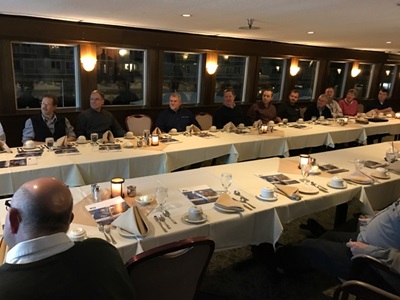 The technical speaker was Carestreamn NDT’s western sales manager, Jay Zimmerman, who presented on “Digital Radiography: More than Meets the Eye.” Zimmerman gave an engaging synopsis of the advantages provided by computed radiography as compared to film. Attendees learned that, with one shot, computed radiography could provide an image quality equivalent to using five different film speeds. Also, digital capture increases reliability by allowing the use of statistical metadata to analyze and enhance image quality at any location in the shot—far beyond what the human eye can detect.

To make sure that the audience remained attentive, Zimmerman made his presentation fun by interjecting 10 pictures of landscapes that he had taken on his travels. When one of the landscapes came up, he asked the audience to guess in which state the picture was taken and write down the answer. At the end of his presentation, Zimmerman tallied the guesses to see who won bragging rights. It was not easy, and the winner only got three states correct.

The attendees of the meeting very much appreciated Zimmerman’s presentation, leaving them a little more knowledgeable about this very important NDT methodology.

On 6 December, the San Diego Section hosted its fourth technical meeting of the 2016–2017 year in conjunction with a spouses/significant others night. The meeting was held at the Best Western Seven Seas hotel, in San Diego, California, with 41 members and guests in attendance.

The talk was well received and generated questions concerning code case proceedings in a legal setting. Program Chair Hans J. Weber thanked Lindsey for his informative talk and presented him with a certificate of appreciation and a speaker’s gift. The evening concluded with the presentation of a gift to each spouse/significant other, sponsored by the Section. Raffles included the 50/50 cash raffle and regular monthly raffle. Raffle prizes were sponsored by the Section; David R. Waitt, Fujifilm; and Larry Olsen, Northrop Grumman. The final raffle of the evening was the white elephant raffle, which presented a fun ending to the evening. All in attendance had a great time. 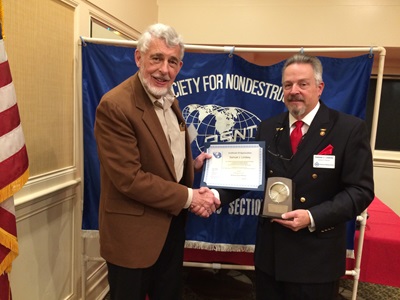 The Saudi Arabian Section held its sixth technical dinner meeting for the fiscal year 2016–2017 on 12 December, at the Carlton al Moaibed Hotel, in Dammam, Saudi Arabia. The Section-sponsored meeting was attended by 130 members and guests, including members of the Bahrain Society of Engineers.

Section Chair Abdullah M. Al Khalifah inaugurated the meeting with a warm welcome to attendees, followed by Section highlights, including a discussion of the computer-based testing Level III exams, which started in January. Al Khalifah also announced that the Section board decided in November to sponsor one student’s nondestructive testing education at King Fahd University of Petroleum and Minerals.

After the announcements, guest speaker Mummadi Mohan Rama Reddy presented on “MIC Detection and Sizing with PAUT.” The presentation was well received.

After the presentation, Al Khalifah and Section Chair of the President’s Award M. Jamil Anjum presented a trophy to Reddy in appreciation. Door prizes were then distributed to the raffle winners. Afterward, attendees enjoyed dinner at the hotel. 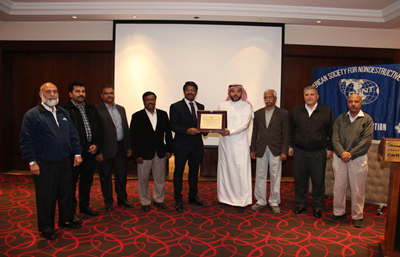 A well-attended meeting of the Saudi Arabian Section at the Carlton al Moaibed Hotel included a discussion of computer-based testing Level III exams and a technical presentation on phased array.

The Southern Africa Section hosted a technical presentation on 8 November at the School of Applied Non-Destructive Examination, in Boksburg, by John Muirhead, from Saiba Engineering (a government approved inspection authority). His presentation was titled “The Role of the AIA in terms of the PER Act.” The well-attended meeting was most informative and enjoyable. 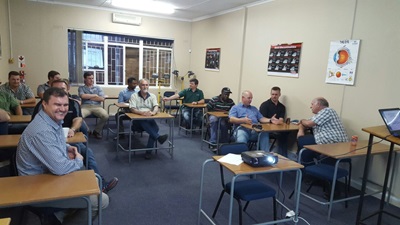 Members of the Southern Africa Section enjoyed a technical presentation in November.

The Turk Section held a meeting on 11 November, at Dizayn Quality Firm Facilities, which was attended by 17 members and guests. A technical presentation was given by Ertugrul Yilmaz on “Pipeline Projects in Turkey: Advanced NDT Techniques on Pipeline Girth Weld Inspection.” 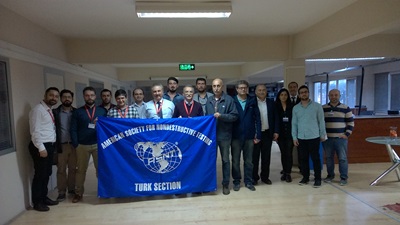 In his presentation to the Chicago Section, ASNT President David R. Bajula noted that approximately 1000 people are consistently involved at the Section level out of approximately 16 000 ASNT members total. 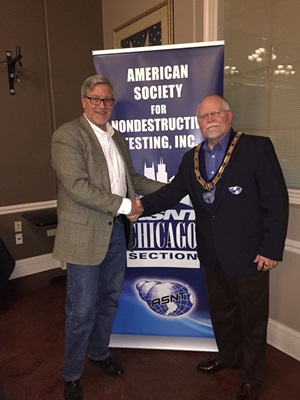