The Atlanta Section held a social event on 29 August at MFE Rentals with 12 members and guests in attendance. The meeting was held to look for participation in leadership positions and to generate ideas for future meetings. All positions were offered as open to new leadership. Anyone interested was to contact Clarence G. Whitt II so an official change could be made. The group present expressed interest to add board members, and possibly others will step forward as the announcement reaches others who were unable to attend. 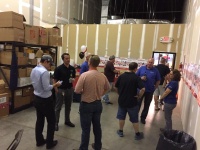 The Atlanta Section held a social event on 29 August at MFE Rentals.

The Chicago Section met on Monday, 11 September with 17 members in attendance at the Crazy Pour restaurant in Villa Park, Illinois. The speaker for the evening was Christopher Woods, director of the Oriental Institute museum at the University of Chicago. He obtained his doctorate from Harvard University in 2001 and has been studying ancient languages since then. The title of his talk was “New Light on a Proto-Literate Accounting Device: The Study of the Clay Envelopes from Ancient Mesopotamia.”

Woods spoke on the use of computed tomography (CT) for investigating ancient clay envelopes from Mesopotamia around the second to third millennium BC. The clay envelopes were used as ancient receipts when commodities were traded or sold. Some envelopes had been broken open in ancient times, but some were still intact. Sealed inside the envelopes are tokens that represent the commodities sold. On the tokens are markings that are thought to represent specific items, such as cattle or grain. When the envelopes ceased to be used, clay tablets took their place and cuneiform writing began. The CT scans were used to view the tokens inside the sealed clay so that they would not have to be broken open. Some tokens contained symbols that continued to be used on clay tablets. Archaeologists believe that this may have been the beginning of writing. 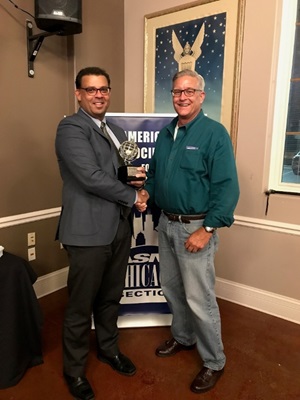 The Cleveland Section held its 41st annual golf outing on Friday, 25 August at Coppertop Golf Club. The winning team was X-R-I Testing, who finished with a –9 for the course. The Section would like to thank all the sponsors, which included Test Equipment Distributors (TED); Advanced Quality Solutions; Orbit; Acuren; Mistras; X-R-I Testing; X-R-I Technical Consulting Group; Centura; and Bearing and Transmission Supply Co. The Cleveland Section Board of Directors would like to thank Tony Sansavera, once again, for handling this annual event.

The guest speaker for the evening was Don Blanchette from Mistras Group, Inc. Blanchette spoke on advanced NDE technologies and applications and how they have become a tool for materials design and engineering. He gave an enlightened presentation on how nondestructive testing technology capabilities have expanded in recent years, primarily as a result of the advancement of computer processing power and the development of innovative inspection applications, such as phased array ultrasonic, pulsed eddy current, guided waves, and acoustic emission. Prior to this, the new chairs for the coming year were welcomed and Bob A. Feole gave a brief outline on this year’s ASNT Digital Imaging Conference, the then-upcoming ASNT Annual Conference, and the new Level II courses offered by ASNT and how to obtain these certifications. Ten new members joined and were welcomed into the group. Blanchette was presented an ASNT travel mug as a token of appreciation for visiting the Section. 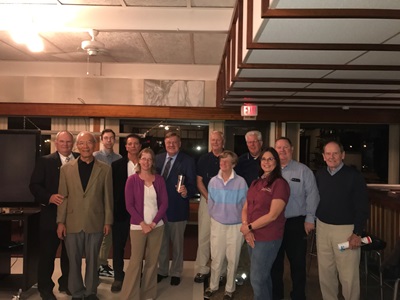 Members and guests of the Connecticut Yankee Section’s 20 September meeting with the speaker, Don Blanchette (center), holding the ASNT travel mug he received from the Section.

The Greater Houston Section held a board meeting on 8 August. Attendees discussed matters pertaining to the upcoming program year, including scholarship funding and the annual business meeting.

The Hawaii Section’s third quarter meeting was held on 7 September at Buzz’s Original Steakhouse in Pearl City, Hawaii. Buzz’s has been the Hawaii Section’s favored meeting site, since the restaurant can accommodate group sizes ranging from a very small group to more than 20 attendees. The Hawaii Section normally plans meetings from 5:30 to 8:00 p.m. The meeting area is away from the restaurant diners, the ambience is more than satisfactory for meetings and presentations, and there are enough tasty food selections at affordable prices.

Ten members and guests were on hand to participate in the meeting discussions, and to enjoy the food, drinks, and camaraderie. Section Chair Derek Barbadillo’s agenda for discussion included planning the membership campaign, future speakers and demos, and an end-of-year event, as well as finalizing the Section newsletter and ad pricing. Director Jayme J. Martin will prepare the newsletter for final review.

On 12 September, nine members and guests of the Lewis & Clark Section met at Flying Pie Pizzeria for a presentation by Gordon Bathurst, senior vice president of Metafix, Inc. Bathurst reviewed the history of silver recovery from film processing, which helps users meet federal and local wastewater discharge requirements, as well as producing a revenue stream from the recovered silver. Bathurst presented a new technology that is much more efficient in terms of percentage of silver reclaimed and manpower requirements to maintain the system, along with the footprint required for the equipment itself. The members present enjoyed the presentation and the gourmet pizza dinner sponsored by Test Equipment Distributors. 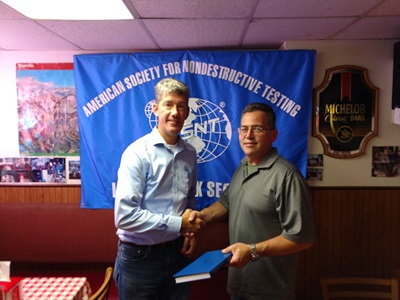 The Metro NY/Northern New Jersey Section held a meeting on 30 August with 30 people in attendance at the Press 195 restaurant in New York. The meeting included a presentation by Paul J. Mespelli from Olympus on shear wave and phased array ultrasonic technology. Attendees also voted on new officers, discussed potential future meeting topics, and scheduled the next Section meeting. 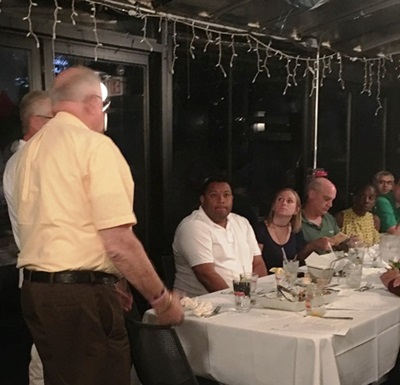 Attendees of the Metro NY/Northern New Jersey Section meeting on 30 August enjoyed a presentation on ultrasonic technology and planned for future meetings.

The North Alabama Section held a meeting on 24 August. Attendees discussed ideas for meetings for the upcoming year (including technical meetings and tours of local facilities), funding and the projected budget, and membership and attendance. The Section presented an award to Sean R. Gnehm for his outstanding service as the previous Section chair. The meeting also included a technical presentation by Richard Woodward and Steve Jelfs from Dürr NDT. 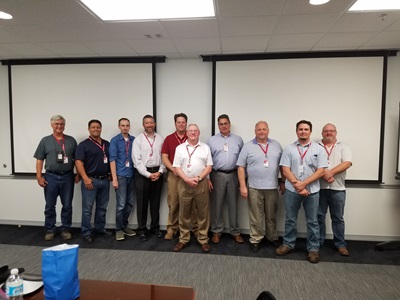 On 24 August, the North Carolina Student Section met at Central Piedmont Community College in the NDT open lab. Sixteen students and one staff member attended and enjoyed pizza and refreshments. It was the first meeting of the school year, where old and new students could get to know each other and forge bonds for future work together. During the meet and greet, Section Chair T’ondre Alexander discussed student participation and collaboration with the Charlotte Section. Attendees also discussed the 10th annual George Pherigo Memorial Golf Tournament to raise funds to send students to the 2017 ASNT Annual Conference in Nashville. Rand B. Ernst, NDET program chair at Central Piedmont Community College, explained the importance of the golf tournament and student participation in the Annual Conference.

On 25 September, 15 members and guests met at the Calabash Seafood restaurant in Mechanicsville, Virginia, for a presentation by then-incoming ASNT President David A. Mandina. The food was delicious, and the presentation was even better. At the end of the meeting, Mandina was presented with a traditional Jefferson Cup from Regional Director William F. Via, Jr.

On 5 September, the San Diego Section hosted its first section technical meeting of the 2017–2018 year. The meeting was held at the Best Western Seven Seas in San Diego, California, with 16 members and guests in attendance.

The speaker for the evening was Douglas L. Davies. The title of his talk was “When We Get It Wrong: Why NDT Matters.” This talk dealt with disasters and near disasters related to NDT. It became a lively discussion on ethics in NDT, and inspired retired members to add to the talk. To close the evening, Section Chair Denise L. McKay presented Davies with a certificate of appreciation and a speaker’s clock from the San Diego Section.

The evening concluded with the regular raffles and a 50/50 cash raffle. Raffle prizes were sponsored by the Section; Larry G. Olsen from Northrop Grumman; Arnold G. Marquez from Sherwin, Inc.; and David R. Waitt from Fuji Films. All in attendance had a good time. 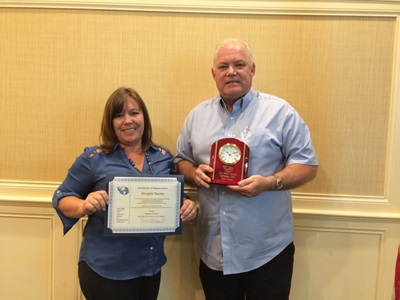 San Diego Section Chair Denise L. McKay (left) presented Douglas L. Davies with a certificate of appreciation and a speaker’s clock for his presentation at the Section’s 5 September meeting.

The Saudi Arabian Section held its third meeting for the 2017–2018 program year on 11 September at the Carlton Al Moaibed Hotel. The meeting was attended by 78 members and nonmembers, including guests from the Bahrain Society of Engineers.

Section Chair Abdullah M. Al Khalifah welcomed everyone and elaborated on the Section highlights, especially the Level III exam, and advised the audience to visit ASNT’s website to learn more. After the announcements, Al Khalifah encouraged the group to attend monthly technical meetings, and gave special thanks to those who came to celebrate the Eid al-Adha Festival. Al Khalifah elaborated on the event of Eid and how Muslims celebrate this occasion twice a year.

As usual, door prizes were distributed to raffle winners by the Section chair and vice chair. All the attendees were requested to join the dinner, which was prepared and arranged by the hotel banquet manager. 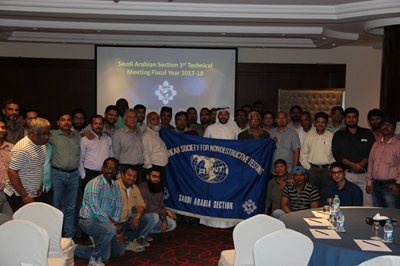 Attendees of the Saudi Arabian Section’s 11 September meeting, including members and guests, gathered for the Eid al-Adha Festival celebration at the Carlton Al Moaibed Hotel in Dammam, Saudi Arabia.

The Southern Africa Section held a very successful committee meeting at the School of Applied Non-Destructive Examination on 25 August. The committee discussed alternative ways of boosting the Section coffers to replace the examination fees from ASNT Level III examinations, which are now being held online. Sponsors, advertising, events, and meetings were considered to raise funds.

The board of the United Arab Emirates Section held a meeting on 16 September at DiTECHT Dubai. Topics discussed included upcoming programming, the President’s Award, a budget review, and training courses.

Attendees of the Old Dominion Section’s meeting at Calabash Seafood on 25 September enjoyed a presentation from then-incoming ASNT President David A. Mandina. 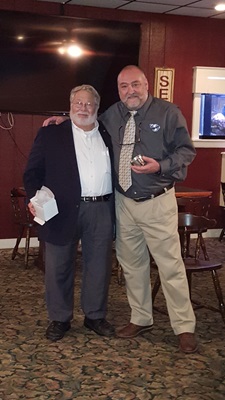