On 8 January the Charlotte Section met at Sonaspection for its January meeting. The guest speaker was Jeffery Anderson, the general manager of Sensor Networks, Inc. Anderson provided background on how the company was formed and an overview of what they do. He also discussed the three product lines they have and their applications: ultrasonic sensors, corrosion monitoring sensors, and remote visual products. The Section would like to extend thanks to the meeting sponsor and host, Sonaspection.

The speaker for the joint meeting between the Chicago Section and ASM International Chicago Regional Chapter on 12 February was Frederick E. Schmidt, president of ASM International. Thirty-five members and guests were present at the Crazy Pour restaurant in Villa Park, Illinois, to hear the talk titled “Use of Nondestructive Testing In Failure Analysis.”

Schmidt highlighted that oftentimes, nondestructive testing is used to help to make proper decisions during the investigation and analysis of failures. The test results can assist the forensic investigator as to where destructive test samples should be extracted. The initial investigation may be involved for planning the inspections and selecting the right method, properly performing the inspections, and finally, interpreting and evaluating the results. A case study was presented that showed radiographic and magnetic particle inspection results on heavy castings. This allowed for targeting the areas that were under high stress and facilitated selection of locations where both macrosections and microsamples were made.

Schmidt then demonstrated how the forensic investigator can organize and present the information using ASTM related documents in a manner such that other investigators, litigators, and juries can adequately comprehend the information. He also highlighted the steps necessary to maintain evidence, since many cases can extend several years. 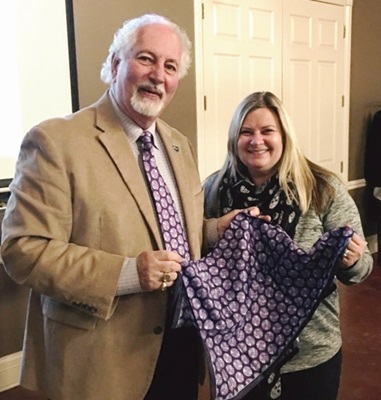 At the joint meeting of the Chicago Section and ASM International Chicago Regional Chapter, Frederick Schmidt, president of ASM International (left), presented an ASM scarf to Jennifer Anaya of Alloyweld Inspection Company in recognition of her receiving the Advancement of Women in NDT Recognition from ASNT.

Despite stormy weather, 17 members attended the Cleveland Section’s 15 January meeting at the Brew Garden in Middleburg Heights, which provided excellent food, as well as the craft beers enjoyed by many of the attendees. Paul E. Ellis of AlphaTron-X, Ltd. gave an interesting presentation on the history of radiographic imaging systems used in NDT. He also shared many pictures from the Porsche Museum in Stuttgart, Germany. The Section would like to thank Ellis for his excellent talk.

On 9 November 2017, the Colorado Section met alongside representatives from American Welding Society for a joint meeting regarding funding a mobile learning lab for a local community college. The meeting took place at Pueblo Community College in Pueblo, Colorado. Approximately 14 were in attendance.

Arthur Malechek was the speaker for the duration of the meeting. Malechek works for the community college in the department of corporate college programs as a technology training coordinator. The discussion centered on a grant the college was working on for funds related to the mobile learning lab. The college is requesting help from local industries and ASNT in regards to the design, layout, and tools needed to get the project from paper to industry.

The meeting also consisted of a short tour of a weld lab at the campus in which a class was in progress. The lab had multiple welding machines and fabrication equipment typically found in a fabrication shop. 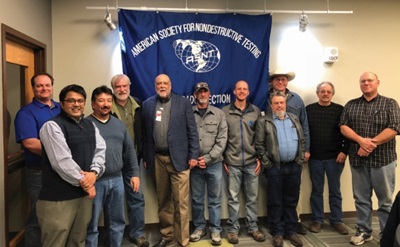 Arthur Malechek (fifth from left) presented to the Colorado Section during its 9 November meeting.

The India Section successfully conducted its fifth technical meeting on 24 February in Coimbatore. There were nearly 40 members in attendance. The technical talk was titled “Transition from Conventional to Digital Radiography” and was given by P. Manivannan, Samik Bhattacharyya, and Krishna Bhuta. The meeting was sponsored by Topax NDT Solutions LLP and cosponsored by Super Quality Services and the Section. 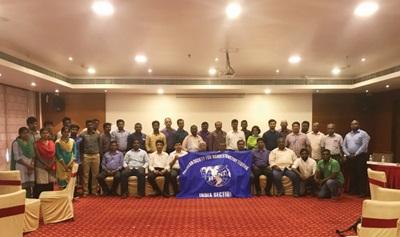 Attendees of the India Section’s fifth technical meeting, held in Coimbatore on 24 February. 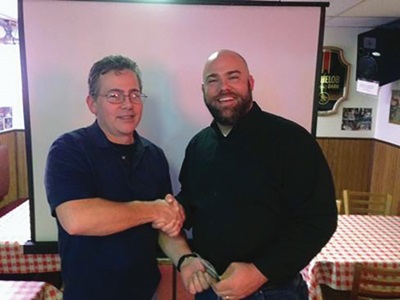 The Miami Valley Section met on 7 February at Miami Valley Gaming, with 18 in attendance, for an extremely informative presentation titled “Back to Basics:  Eddy Current” by Brian Bulgrin from American Testing Services, Inc. Bulgrin provided a comprehensive overview of the basics of eddy current and generated a lively discussion around applications of eddy current and comparisons to other techniques. 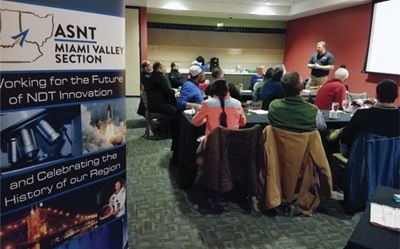 The 13 February dinner meeting of the Mohawk Hudson Section was a presentation titled “Additive Manufacturing at GE” by William Carter of GE Global Research in Schenectady, New York. This meeting was also the annually held joint dinner meeting with ASM International and American Welding Society. The powder-bed fusion process got its start in 1986. In 30+ years, it has seen steady growth, resulting in a new manufacturing technology that has evolved from “rapid prototyping” to “functional prototyping,” and now into full-scale production of metal parts. Interest at GE started 10 years ago with investigations into reducing the cost of a fuel injector for an aircraft engine. GE quickly realized that additive manufacturing could free designers from constraints of conventional manufacturing processes, opening paths for novel fuel-saving designs. This talk featured some of the lessons learned in that development and highlighted research in developing the process for higher speed, higher accuracy, and larger part volumes.

Carter joined GE’s Global Research in 1983, and has conducted research programs in numerous manufacturing techniques including casting, coating, forging, and spray forming. He now works in the additive manufacturing laboratory. He has published more than 80 technical articles and a book chapter, and he also holds 41 US patents. The dinner meeting was held at the Edison Club in Rexford, New York, with 29 members and guests at the event.

The North Alabama Section held a meeting on 13 February at Yellowhammer Brewery in Hunstville, Alabama. This event was a joint meeting between the North and Central Alabama Sections. The hosts of the meeting were members of the Central Alabama Section, who traveled to Huntsville to provide a technical presentation. Group discussions included the following: hosts for presentations/tech sessions, better ways to reach out to members, and local promotion ideas. There were also introductions of the Central/North Alabama members.

On 16 November 2017, the Pittsburgh Section met at the Springfield Grill in Cranberry Township to hear Jesse Groom of System One speak about microwave inspection. He did a great job filling in for Robert Woodward, who was called away on business. Microwave technology is used to interrogate rubber, fiberglass, HDPE, and other materials that prove difficult to inspect with traditional NDE methods, and can be done with either manual or automated scan imaging techniques.

On 13 February, the Section had Mike Giannini present at the technical meeting. Giannini helped everyone understand the new MPI database system upgrade for wet bench equipment and how it can improve NDT quality control and inspection productivity by downloading a setup that is stored at the machine. This new system can save time in nearly every aspect of the inspection process. The Section would like to thank Giannini for taking the time to educate attendees on what is new in NDT. 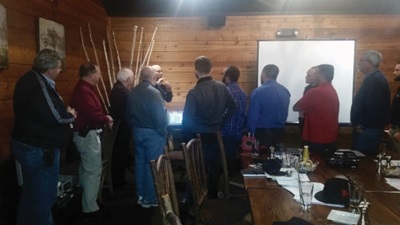 On 6 February, the San Diego Section hosted its fifth technical meeting of the 2017–2018 year. This event was Past Chairs’ Night. The meeting was held at the Best Western Seven Seas with 19 members and guests in attendance.

The speaker for this event was Michael V. McGloin, ASNT regional director for Region 15. McGloin’s talk was titled “Home Inspections.” This talk covered home inspections that homeowners should be doing, and what can happen if such inspections are not done frequently, even if it seems trivial. His presentation covered small water leaks and what the end discovery of damage detailed. It was surprising to see the amount of damage that can be caused by things thought to be minor. This included the amount of inconvenience during repair/renovation, mold discoveries, and what local building code requirements are and the repair costs. Also discussed was what insurance policies cover and do not cover. It was a lively discussion with audience participation. 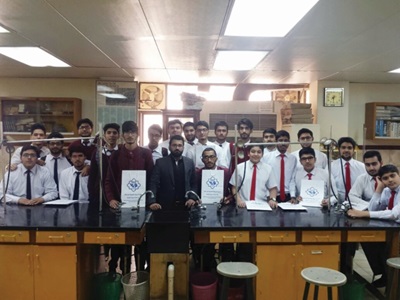 Members of the Saudi Arabian Section participated in the Science Fun Fair at the International Pakistani Al Khobar School.

The South Texas Section held its January meeting at the facilities of Sonatest on 31 January. Twelve people were in attendance. The presentation and lab tour were presented by Jeremiah Rawls, who is the regional sales manager. Rawls has been as Sonatest for 17 years, starting in the business as a transducer technician. Sonatest provides NDT ultrasonic solutions and has been an NDT equipment manufacturer for the past 60 years. Everyone enjoyed seeing the inside story on manufacturing ultrasonic transducers. 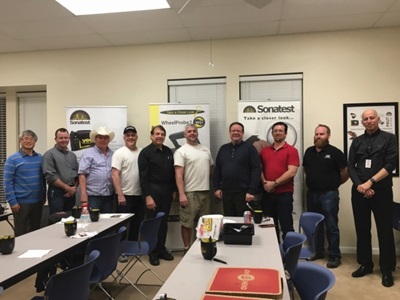 Attendees of the South Texas Section’s January meeting enjoyed a tour of Sonatest.

During its fifth technical meeting of the 2017–2018 year, the San Diego Section took time to recognize past Section chairs. 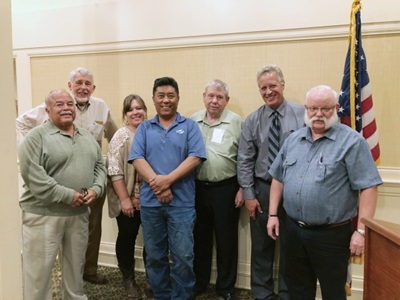