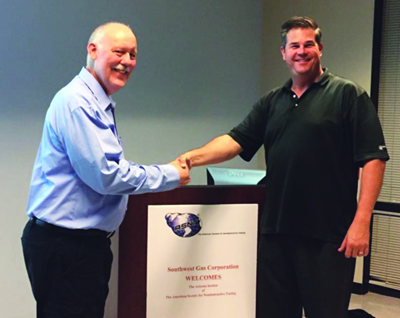 The Capital of Texas Section met on 18 January at MFE Enterprises, Inc. in Dripping Springs, Texas, for a tour of the MFL tank floor manufacturing facility and an educational presentation on the MFL method and its application to detecting metal volume loss in aboveground storage tank floors. The guides, Bryan Duke and Bill Duke, discussed the history of tank floor inspection and the evolution of MFE as a company. MFE has expanded in the last couple of years to include NDT equipment rental with offices worldwide. Thirteen members and guests attended the tour, which lasted about two and a half hours. 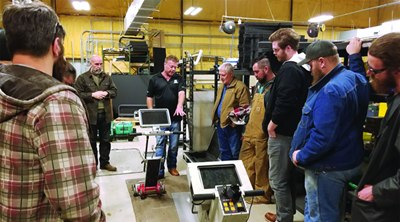 The Chicago Section met on 15 January with 21 guests and members in attendance at the Crazy Pour restaurant in Villa Park, Illinois. The guest speaker for the evening was ASNT President David A. Mandina. Mandina owns Mandina’s Inspections in Harvey, Louisiana, and is an ASNT NDT Level III in five methods with a number of other qualifications from other countries as well.

Mandina’s talk addressed requirements for training and the need to interface with ISO 9712 and the global community, while protecting the interests of ASNT’s members. He also reviewed the ASNT organization, its Board of Directors, and elected officers and their duties. His devotion to the professionals who make up the “rank and file” of ASNT was undeniably evident. Mandina emphasized the teamwork concept, with illustrations from his on-the-job experiences and related how they formed his leadership philosophy. He strongly encouraged all members to be informed about the issues that are put forth for vote. Mandina passionately expressed the importance of involvement in the local sections, the recruitment of new members, and providing feedback to the national organization. 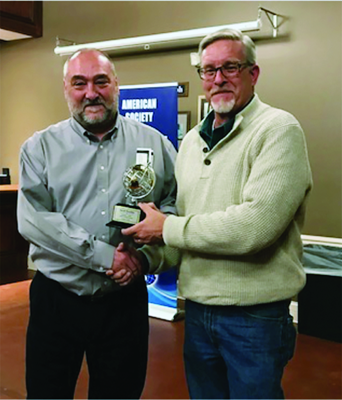 The Cleveland Section held a meeting on 20 November 2017 at the Brew Garden, which was attended by 22 members and guests. Unfortunately, the scheduled presenter could not attend the November meeting due to illness. The Section’s board of directors did not skip a beat; they decided on a roundtable discussion, which included all 22 attendees, that generated a lively discussion on some questions regarding Level III recertification and utilizing the point system, and offered a number of creative ideas to increase participation in the monthly meetings. A possible disaster turned into a very productive meeting. The Brew Garden provided excellent food as well as the craft beers enjoyed by many of the attendees.

On 12 December 2017, seven members of the Lewis & Clark Section attended a presentation by Jay Zimmerman, western region sales manager of Carestream NDT. Zimmerman’s presentation covered computed radiography basics and the development of the technique to the point where it has progressed today. Zimmerman had a quiz afterward, and Ryan A. Sims of International Inspection won the $25 gift card prize, which he donated back to the Section’s golf tournament for 2018. Test Equipment Distributors sponsored the meal of gourmet pizza at Flying Pie Pizzeria. 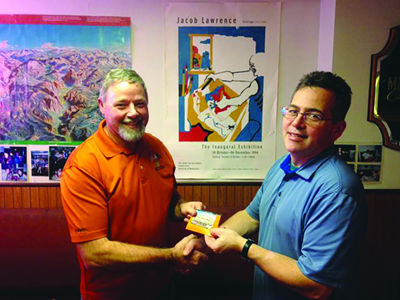 The Miami Valley Section met on 6 December 2017 at Miami Valley Gaming for a very festive holiday celebration. Twenty members came out for the meeting. The Section’s board met on 17 January at Uno Pizzeria & Grill in West Chester, Ohio, for a meeting. Seven members and guests came out to work on Section issues and concerns and make plans for the future.

The Old Dominion Section held its December meeting at the Hanover Tavern and Barksdale Christmas Play on 1 December 2017. Twenty members and guests gathered to enjoy dinner and the evening play after a brief address from William F. Via, Jr., the Section’s Regional Director.

The Pacific Northwest Section celebrated its New Year’s holiday party at ACME Bowling, Billiards & Events with a delicious catered banquet and dessert bar on 5 January 2017. Everyone had a great time bowling and shooting pool. Families brought children, and there was even one family with three generations. Altogether, the Section had eight children under the age of 12 show up, and they loved bowling. Each child was given $5 in quarters to play in the arcade room. Everyone laughed and played hard all night long—just like kids—building connections and lasting friendships.

The Section held a meeting on 8 January at the Old Spaghetti Factory in Tukwila, Washington. The meeting included a presentation by Lennart Schulenburg from VisiConsult Sales and Marketing. The presentation was both educational and fun. It incorporated videos that demonstrated automated defect recognition technology. The students, as well as the radiography engineers that came, were completely engaged in the presentations and asked many insightful questions. 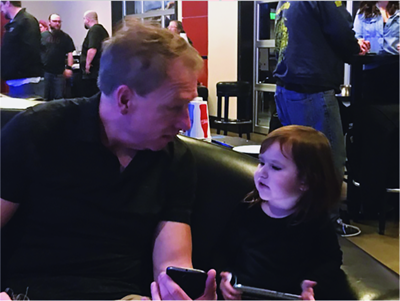 Friends and relatives accompanied members of the Pacific Northwest Section for their New Year’s holiday party.

The Piedmont Section held a meeting on 12 December 2017. There were nine members in attendance. Dale S. Hope gave an excellent presentation on NDT life at Cape Canaveral. The Section would like to thank Hope for taking the time to support his Section.

The Section held another meeting on 16 January. Tommy J. Boyers gave a presentation on mentoring in the NDT industry: a topic everyone is affected by as members try to get more young people involved in the industry. The Section also discussed the vendor night planned for 20 February. There were 12 members in attendance. 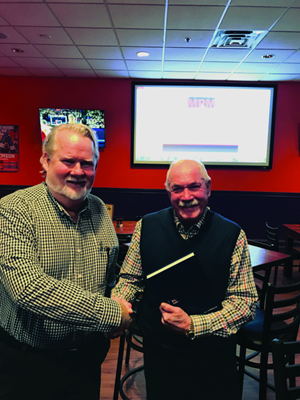 Piedmont Section Treasurer William C. Plumstead (right) presented Tommy Boyers with a copy of ASNT’s From Vision to Mission: ASNT 1941 to 2016 for his presentation at the Section’s 16 January meeting.

The Rockford Stateline Section’s December meeting at the Thunder Bay Grille conference room in Rockford, Illinois, had 12 attendees. Timothy P. Hughes started the meeting with a discussion on picking a design logo for the Section, and then welcomed the guest speaker, Mike L. Kelley from Olympus. Kelley presented on the advantages of phased array: having “a paint brush of sounds in all directions” versus a single line of sound. He also talked about ultrasonic versus radiography, real-time digital acquisition, and the pros and cons of each. 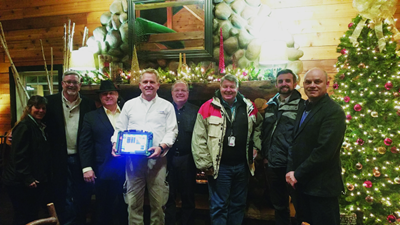 On 5 December 2017, the San Diego Section hosted its fourth technical meeting of the 2017–2018 year. This event was a Christmas spouse/significant others night. The meeting was held at the Best Western Seven Seas in San Diego, California, with 29 members and guests in attendance.

The speakers for this event were Marijo Davis and Miguel Corona. They enacted a lively skit about Wyatt Earp and his third wife, Josie. After their “arrival” at the San Diego train station, they talked about Earp’s past, from the town of Tombstone to a series of business ventures: mostly successful, quite a few of them in San Diego, and several associated with horse racing. Earp was prosperous. The skit ended with Earp’s deciding to travel to San Francisco. The audience greatly enjoyed the presentation.

Each guest (spouse or significant other) received a gift from the Section. Following the presentation was the Christmas “white elephant” raffle, which really put the audience in a festive mood. All in attendance had a good time. The Section wishes to thank the San Diego Section vendors in attendance for bringing gifts to share: Peter E. Pelayo, Met-L-Chek; Phil Fetto, Chemetall; and David R. Waitt, Fujifilm. 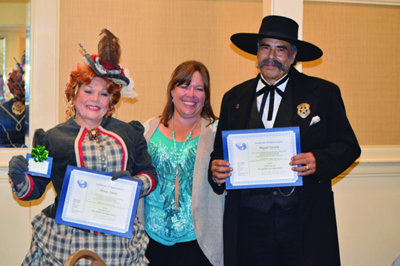 The Saudi Arabian Section held its sixth technical dinner meeting for the fiscal year 2017–2018 on 18 December 2017 at the Carlton Al Moaibed Hotel. The meeting was attended by 86 members and nonmembers, including guests from the Bahrain Society of Engineers. Section Chair Abdullah M. Al Khalifah inaugurated the meeting with a warm welcome and an overview of the Section’s highlights, including information about Level III examinations.

After the announcements, Al Khalifah invited the guest speaker from NDT & Corrosion Control Services, General Manager Leela M. Murugan, to start his presentation. After the presentation, a question/answer session was held and technical questions were satisfactorily answered by the guest speaker. 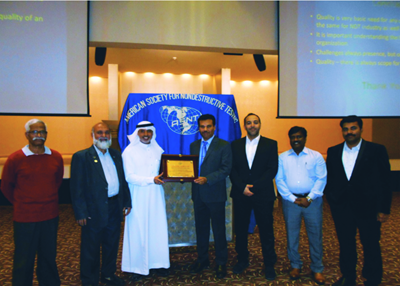 The Shanghai Section’s 2018 Phased Array Special Topic Seminar was successfully held in Yantai, China, at the Hujing Hotel on 6 January. The seminar was organized by the Section and cosponsored by Shandong Yuan Zhuo Inspection Technology Co., Ltd. A total of 94 NDT experts from all over China participated in the seminar. This seminar was focused on exchange and discussion of phased array ultrasonic testing (PAUT) technology.

This seminar provided the chance to expand the influence of the Shanghai Section, while the sharing from NDT experts helped participants to understand PAUT and its application. The participants all benefitted from the seminar, and the Section hopes to conduct more academic exchange activities in the future.

The Shanghai Section held a special topic seminar on phased array on 6 January, which included several presentations from experts in the field.

The Southern Africa Section held its first committee meeting of the year at the School of Applied Non-Destructive Examination on 16 January. Topics discussed were upcoming ACCP examinations, the golf day in March, the NDT conference in February, and potential speakers for upcoming technical evenings this year. The Section was also delighted with the profit that was made on sales of the 2018 desk pad, which replaced the traditional wall planner.

The United Arab Emirates Section held its first technical dinner meeting of the year at the Crowne Plaza Yas Island in Abu Dhabi on 20 January. This meeting was sponsored by Eddyfi Technologies. Before Eddyfi’s presentation, Section Chair Marwan F. Basrawi spoke about the Section’s organization of the upcoming regional conference, GNDT Expo 2018, which is to be held in Dubai, UAE, 25–27 September 2018. After this announcement, Emad Javais, Eddyfi’s sales manager for the UAE and Saudi Arabia, gave a well-received presentation on the advanced array of technologies and equipment that Eddyfi brings to the region through its relatively recent acquisition of three other equipment suppliers: Silverwing, TSC, and Teletest. This was followed by a discussion led by Section Secretary Sebastian Zeferino Fernandes about local certification issues and challenges, during which it was announced that a Certification Oversight Committee had been formed by the Section to better control authenticity of certifications in the UAE. Dinner was served thereafter, allowing further networking among the 37 members in attendance. 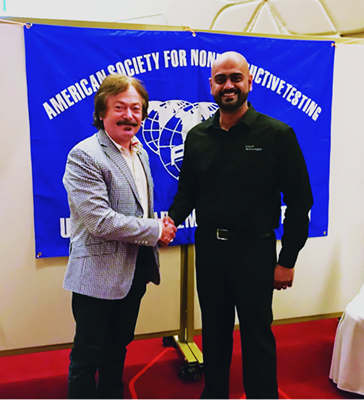 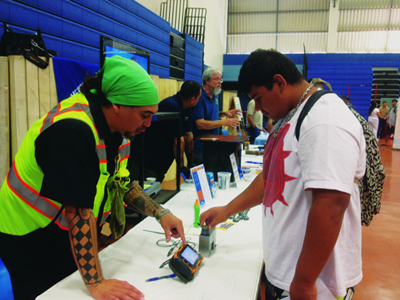