The Air Capital Section board members met on 15 July to lay out a plan for the 2018–2019 program year. There were great ideas, and with all of the officers adding some input, the board believes that it has set up a good path for the year for students and NDT professionals in the Wichita area.

Some highlights from the meeting include interest in participating in tours of local schools that teach NDT, in addition to the possibility of planning a Section Christmas party. Some members mentioned how the Section has lacked nontechnical meeting options that would enable members to relax and engage with each other and create ties that go beyond the NDT life.

One goal for this year will be to send out meeting minutes via the ASNT Section Management Tool so all members can review and give their input if they are unable to attend a meeting. The Section encourages all members to send advice and suggestions to help the board plan better and set up meetings that benefit all members, because that is the Section’s main goal every year.

On Thursday, 23 August, Chicago Section Treasurer Jennifer Anaya and Secretary Stuart A. Kleven of Alloyweld Inspection Co. visited Argonne National Laboratory in Argonne, Illinois, to participate in the International Atomic Energy Agency at Argonne “Regional Training Course for Teachers to Introduce Nuclear Sciences in Secondary Schools through Innovative Approaches.” As part of the two-week course, nondestructive testing was highlighted on one of the program days. Anaya, Vice President of Alloyweld Inspection, presented on the use of radiation in industry. 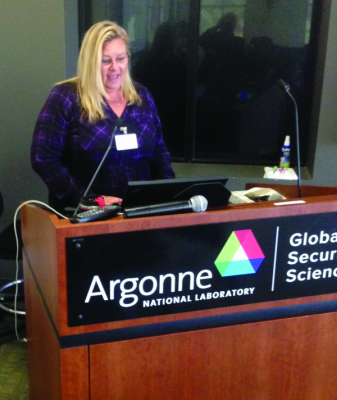 The Greater Houston Section met on 15 August to plan for the coming 2018–2019 program year. Eleven board and executive committee members were present for the meeting, which was held at The Republic Grill at the Battleground at Deer Park golf course. The treasurer’s report was reviewed, and the annual budget was finalized during the meeting. The executive committee members received their final placements and tasks for the coming year. Planning included the then-upcoming ASNT Annual Conference in Houston, vendors night, the annual golf tournament, scholarship recipients, the website, arrangements for other upcoming events, and adult education seminars.

The Lewis & Clark Section kicked off the program year with a bang. Fifty-two people came out to golf at the Section’s annual golf tournament in Portland, Oregon, on 11 August. Along with the sponsors and the teams that played, the Section raised enough money to donate $3000 to the local NDT program at Linn-Benton Community College. The Section would like to thank the teams and sponsors for supporting a great cause. Next year’s golf tournament is scheduled for 10 August 2019. 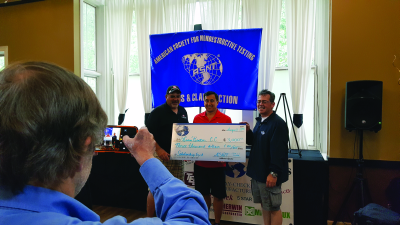 The Metro New York/Northern New Jersey Section held a planning meeting on 2 August. Officers discussed ways that the Section could recruit new members in support of the Dig Deep, Fly High member-get-member campaign. The officers also discussed the fact that they will work with the ASNT International Service Center to update the Section’s bylaws and incorporate the Section. Other topics discussed included processing member payments for meals, future meeting locations, topics for future meetings, and a tentative schedule.

The North Alabama Section held a Section meeting attended by 10 members on 14 August at Yellowhammer Brewing in Huntsville, Alabama. The meeting included a preliminary board meeting to discuss future meeting topics and to vote on the purchase of a Section banner. In addition, Flynn Spears, Laser Technology, delivered a presentation on laser shearography where he reviewed the theory and applications of laser shearography as it relates to the aerospace, marine, and wind industries.

The Saudi Arabian Section held its first technical dinner meeting for the fiscal year 2018–2019 on 16 July at the Carlton Al Moaibed Hotel. The meeting was attended by 57 members and nonmembers, including guests from Bahrain Society of Engineers. Section Chair Abdullah M. Al Khalifah inaugurated the meeting with a welcome and announcements from the Section. After the announcements, Al Khalifah invited the guest speaker, Section Vice Chair Muhammad Jamil Anjum. After the presentation, the Al Khalifah distributed door prizes and invited everyone to have nice buffet dinner arranged by the Carlton Al Moaibed Hotel. 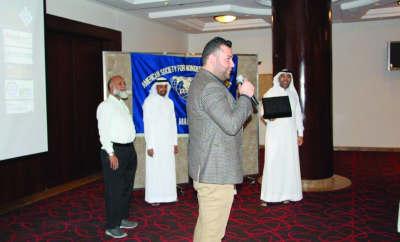 The Section had a productive committee meeting on 23 August at the School of Applied Non-Destructive Examination (SANDE) in Boksburg, South Africa. The agenda for the coming year was discussed and planned. The new board came up with some really great ideas for fundraising and for technical evening topics. The new desk calendar advertisements have all been sold as the desk calendar proved to be very popular. The Southern Africa Section’s board is keen for the Section to obtain a Silver Award in the President’s Award program this year. 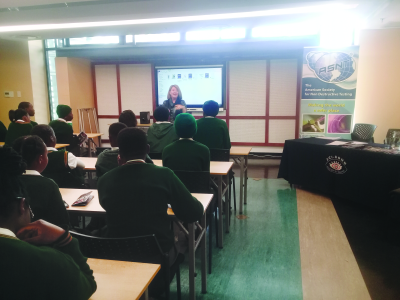 The objective of the Section is to work to raise awareness and learn about new trends in nondestructive testing technologies and to share experiences with professionals to strengthen the industry’s performance and knowledge. During the meeting, some ASNT section policies were discussed to make sure that the Section meets the requirements of being an ASNT section. This topic will be further discussed at the next Section meeting. 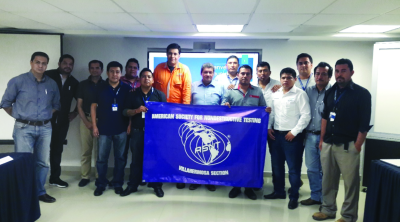 The North Alabama Section held a meeting on 14 August that included a discussion of future Section plans and a presentation on laser shearography. 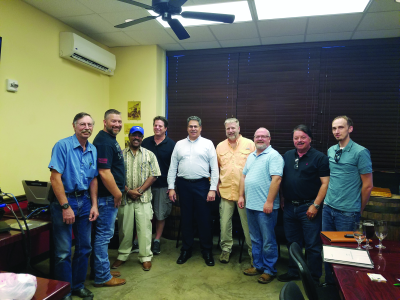 Attendees of the North Alabama Section’s meeting at Yellowhammer Brewing on 14 August.