The ASNT Central Ohio Section joined with other organizations from the Columbus Technical Societies to tour an Amazon fulfillment center. The tour provided insight into how IT, robotics, and human machine interactions combine to efficiently receive, unpack and store, pick and pack, and ship millions of products throughout Central Ohio. Attendees were also informed of educational opportunities at Amazon, who has partnered with Columbus State Community College.

The Charlotte Section met on 13 September to kick off the 25th Annual Shrimp Boil. Incoming ASNT President, Michael V. McGloin, and ASNT Executive Director, Neal Couture, were in attendance. The Section announced it will fund the ASNT Charlotte Section Scholarship for NDT students at Central Piedmont Community College. Charlotte Section Chair, Bradley Brandt, introduced incoming chair of the North Carolina Student Section, Muriel Magloire. Magloire was sworn in by Regional Director, Hussein M. Sadek. Attendees enjoyed an evening of live music and shrimp boil dinner. The Section would like to thank all attendees including our visitors McGloin and Couture, and FlawTech for hosting and sponsoring this event.

On a somber note, the attendees held a moment of silence in memory of long-time ASNT member Paul Zayicek, who passed away suddenly the week before the Shrimp Boil. Sadek shared remembrances of Zayicek and photos from “the good old days.” The section remembers Zayicek as a professional and gentleman, and he will be missed.

The Chicago Sections of AWS and ASNT met for a joint meeting on 9 October with 30 guests and members in attendance at the Bohemian Crystal Restaurant in Westmont, Illinois. The guest speaker, Chuck Loeppert of CTL Group, Skokie, Illinois, discussed the topic “Destructive and Nondestructive Testing of Thermite Welds in Railroad Rails.” CTL Group is a laboratory that performs destructive and nondestructive testing of railroad equipment, bridge components, and other items in the building industry. Both steel and concrete inspection were addressed. Inspection techniques cited included ultrasonic, radiography, magnetic particle, dimensional, hardness, and visual inspection. Destructive methods were mentioned as well, and Loeppert highlighted the different tests required by the American Railway Engineering and Maintenance-of-Way Association. Videos were shown to attendees depicting the load testing and failures that can occur on rails, concrete beams, bridge stays, wire rope, and rail car bolsters.

Attendees of the Chicago Section’s 9 October meeting learned about testing of railroad rails.

The Cleveland Section met on 21 October with 23 guests and members at Mavis Winkles Irish Pub in Twinsburg, Ohio. ASNT Regional Director, Gary Mathias, attended the meeting. The Section’s speaker was Larry Gochnauer, UT Level II, of Danatronics. Gochnauer presented the history of UT thickness gauges/equipment and provided comparisons to several on the market. The latest offerings were described, and battery life was discussed and shown to be up to 27 hours. The Cleveland Section would like to thank Gochnauer for his presentation. 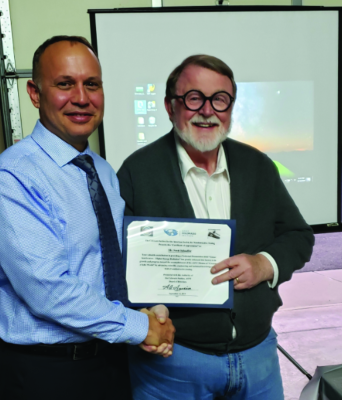 The Hampton Roads Section met on 16 October at Finn McCool’s in Virginia Beach, Virginia.  The meeting discussed a membership initiative to attract active-duty NDT professionals including advertising the Spring Conference.  A review of the Section’s membership list revealed that the legacy connection to Newport News Shipbuilding NDT personnel seems to no longer exist.

The Hampton Roads and Old Dominion Sections met on 23 September at Dorado’s Ristorante in Williamsburg, Virginia. The meeting celebrated the long VDOT career of Regional Director William Via, Jr. Via has been a member of both sections through the years. The sections recognize Via as a great friend and mentor.

The incoming ASNT President, Michael V. McGloin, was the guest speaker. McGloin spoke about mentoring and informed the group about activities connected to the fall Annual Conference and spring Research Symposium.

(A photo from this event can be found in the December 2019 issue of ME under the Old Dominion Section of Section News).

The Kuwait Section met on 30 September at Hotel Kohinoor in Fahaheel, Kuwait. The Section’s educational director, Sangili Gunasekaran, provided an update on news and activities. The meeting included a presentation, “Small-Bore Inspection using the PAUT Technique” by S. Satheesh Kumar, the department head of M/s Intrex, Kuwait. The Section shared practical experience during the technical presentation. A. Mohammed Rajput presented a vote of thanks. The Section would like to thank Kumar, S.S. Murugan, and Gunasekaran for coordinating the event arrangements. 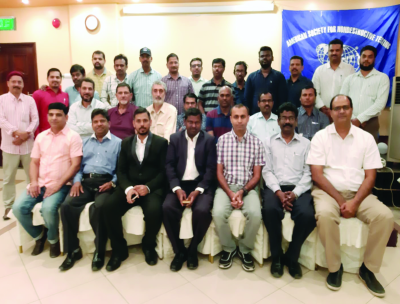 The Lewis and Clark Section met on 8 October at Flying Pie Pizzeria in Portland, Oregon. Joseph Simas from NDT Systems presented on ultrasonics, bond testing, and the field of imaging for both techniques. Attendees learned about imaging bond testing in comparison to conventional bond testing with C-scan imaging and analysis software. The section would like to thank Simas for his presentation. 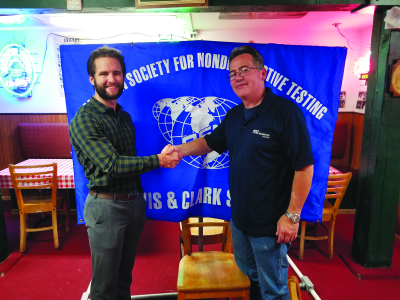 The Metro New York/Northern New Jersey Section met on 18 September at VJ Technologies in Bohemia, New York, with 24 members in attendance. Rahul Alreja presented information on computed tomography (CT) and its different applications and limitations. Attendees participated in a facility tour viewing different system setups and applications. The Section would like to thank VJ Technologies for inviting us to their facility and Michael Keeley for coordinating the meeting, as well as Alreja for his presentation on “Autonomous Quality Control: The Future is Now.”.

The Minnesota Section met on 19 September at Al and Alma’s Minnetonka Lake Dinner Cruise, with 23 members, students, and guests attending. The Section honored past leadership, including seven past presidents. The Section would like to thank all who attended, as well as Al and Alma’s crew and staff on Lake Minnetonka. 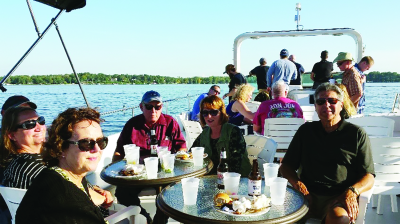 The Mohawk Hudson Section met on 15 October at the Van Dyck Restaurant & Lounge in Schenectady, New York, with 10 members and guests in attendance. Wes Wren from Avonix provided a presentation on imaging using real-world examples and quality issues facing people today. The presentation addressed how computed tomography (CT) with rotating target tube technology is being used to improve results, allowing production of better products in additive manufacturing, electronics, composites, castings, and many other areas. The presentation also covered how CT data may be utilized as the industry moves into the world of AI (artificial intelligence).The Section would like to thank Greg Mohr for coordinating the dinner.

The North Atlantic Section met on 23 October at Arconic Engines in Darley Dale, Matlock, United Kingdom, with 19 members in attendance. Some attendees were taken on a tour of the facility while others listened to a presentation by Phil Curzon (UT Level III). The tour followed the process flow of the site, detailing material receipt, closed die forging operations, NADCAP-approved heat treatment facilities, machining, and NDT. The Darley Dale site opened in 1942 as a shadow factory to the Sheffield sites, which were under air attack during WWII. The site covers 9 acres and specializes in closed die forgings for aerospace, civil nuclear, power generation, and the medical industries. There are approximately 200 employees who operate fully integrated design, manufacturing, and testing services. Their NDT facilities include six operational ultrasonic immersion tanks for the inspection of critical discs and shafts for aerospace engines.

The North Carolina Student Section met on 13 September at FlawTech in Concord, North Carolina, with 12 members in attendance for the 25th Annual Shrimp Boil. Charlotte Section Chair, Bradley Brandt, invited the new Student Section chair, Muriel Magloire, to make introductory comments. The Section’s new officers and board members were sworn in by Regional Director Hussein Sadek. Attendees enjoyed live music, networking opportunities, and posed for a picture with incoming ASNT President Michael V. McGloin and three past ASNT Presidents (Sadek, Raymond Morasse, and Ricky Morgan). The students would like to thank the Charlotte Section and FlawTech for hosting a wonderful evening. 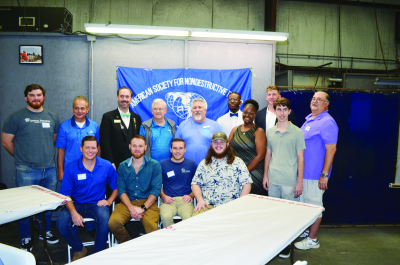 Pitarys’s presentation answered the question “why clean?” by noting that cleaning enhances subsequent processes, value, performance and reliability, resulting in overall enhanced esthetics. The processes and mechanisms of cleaning were discussed, including the chemistry concerns with respect to the performance and condition of the final parts. The Section would like to thank Pitarys for speaking at the meeting. 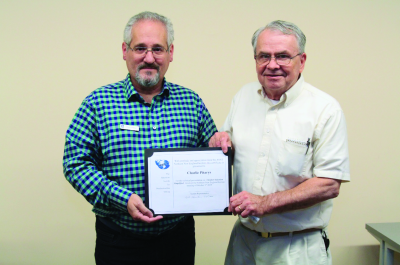 Charlie Pitarys received a certificate of appreciation and an engraved water flask for his presentation from Section Membership Chair Dana Wilson (right).

The Oman Section met on 16–17 of October at the Hormuz Grand Hotel Muscat for the first Oman Inspection & Integrity Conference. The event was managed by PiMS Quest LLC and sponsored by Petroleum Development Oman (PDO). The conference brought together NDT service providers with industries and facilities that need NDT technologies. The conference also brought together integrity engineers with NDT service providers and technologists.

The Pacific Northwest Section met on 1 October with 17 members in attendance at the Great American Casino in Tukwila, Washington. Bryan E. Laubscher of Odysseus Technologies Inc. presented on nanotube technology, its interaction with physics, and the development of a space elevator. Laubscher presented on NDT’s role in keeping space elevators operational and safe.

The Piedmont Section held a successful golf outing with 38 members and guests in attendance. The participants enjoyed a BBQ buffet as Thom Dunn presented awards. The section event raised $1485, half of which will be donated to Wounded Warriors. The section would like to thank the golf coordinators, Dunn and Ronald Ruggles, as well as Bill Plumstead and Chuck Solesbee. The Section would also like to thank the sponsors: MPM Products, Applied Technical Services, ChiNDT, Vermon NDT, Newco, FlawTech, and Equipcon.

The Piedmont Section met on 16 October at the Hilton in Greenville, South Carolina, with eight members in attendance. Alan Caulder of Advanced OEM Solutions presented “A Review of Advanced Ultrasonic Techniques: Phased Array and Full Matrix Capture.” He gave a review of basic UT principles including wave modes and natural focus. He then presented some sample images comparing phased array with the FMC/TFM method. The Section thanks Caulder for his presentation.

The Pittsburgh Section held its first meeting of the program year on 19 September. The meeting was held at the North Park Lounge in Cranberry Township, Pennsylvania, with 15 members and guests in attendance. Regional Director Gary E. Mathias was the guest speaker for the evening and gave a presentation on the region. The Section would like to thank Mathias for attending.

The San Diego Section met on 1 October at the Seven Seas Lodge in San Diego, California, with 18 members and guests in attendance. Randy Jones of the Baker Hughes Co. delivered a presentation titled “Corrosion Is Where You Find It.” Jones spoke about ultrasonic testing in the nuclear, petrochemical, and aviation industries, and covered how corrosion begins and the amount of damage corrosion can cause. The Section presented Jones with a certificate of appreciation and a speaker gift. The meeting concluded with raffles and the recognition of visiting vendors Mathew Kaparic of Advanced Test Equipment Corp. and Jim Lyttle of TED. Monthly raffle prizes were sponsored by the San Diego Section and Larry Olsen of Northrop Grumman.

The South Texas Section met on 26 September at the Tandoor Palace with 10 members and guests in attendance. Gavin Dao, Director of Business Development for AOS/TPAC Group, presented “FMC/TFM: Beyond Phased Array UT, Improvements for Weld Inspection and Review of New Algorithms”. The Section would like to thank Dao for his presentation. 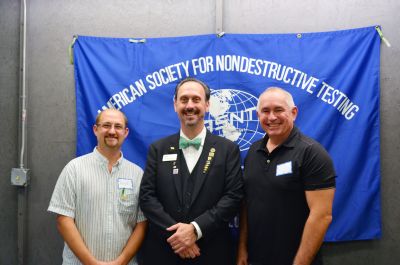