The Boston Section held a meeting on 7 February at Olympus Scientific Solutions Americas in Waltham, Massachusetts, with 17 members and guests in attendance. Erich Henjes of Olympus delivered a presentation titled “Improved Inspection Workflow Utilizing a Connected Instrument and Cloud Applications.” 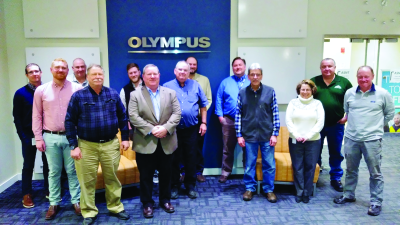 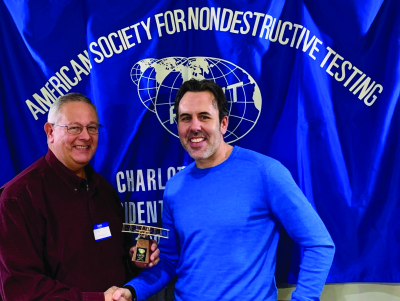 On 21 January, the Chicago Section met at Crazy Pour in Villa Park, Illinois. There were 21 members and guests in attendance. 2018–2019 ASNT President Scott P. Cargill was the speaker and presented on the “State of the ASNT Union.” After showing a video of himself accepting the position of president at the 2018 Annual Conference in Houston, Texas, Cargill shared how his road to the Board began. He challenged individuals to not just speak up but to step up. Cargill highlighted a few of his most important initiatives for the Society over the course of 2019, including electronic training and education, mentoring, and recruitment.

Cargill also acknowledged his predecessor David A. Mandina and the hard work he did on behalf of the Society. 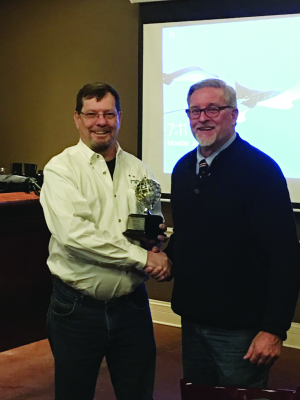 Despite very wintry weather, 16 members and guests attended the Cleveland Section’s meeting on 21 January at the Brew Garden in Middleburg Heights, Ohio. Gary E. Mathias from The Modal Shop Inc. in Cincinnati, Ohio, gave an interesting presentation on resonant nondestructive testing from the NDT-RAM division of The Modal Shop. He highlighted the simplicity of in-line OEM parts testing using this technology, which compares known acceptable frequency data with each individual part, allowing 100% production inspection without a bottleneck delaying production throughput. There was a lively Q&A session following Mathias’s presentation. The Section thanks Mathias and The Modal Shop for the interesting presentation.

The Detroit Section held a board meeting on 11 February that was attended by five Section officers. The officers planned for the-then upcoming April meeting, which would feature a presentation by 2018–2019 ASNT President Scott P. Cargill as well as a thermography presentation by Megan McGovern. The officers also discussed holding a summer fundraiser, such as a golf tournament or sportsman’s dinner combined with an auction. Section officers are also looking into attending an upcoming Regional Planning Meeting and the 2019 ASNT Annual Conference in Las Vegas, Nevada.

On 15 January, the Great Salt Lake Section held a meeting at the Ogden-Weber Technical College in Ogden, Utah. There were 23 members, students, and guests present at the meeting. Kirk N. Lawson, program advisor at Ogden-Weber Technical College, provided an informative presentation about NADCAP. Lawson addressed the history of NADCAP and why it was started, as well as the value for flight safety that NADCAP has provided. Lawson has 38 years of NDT experience and is ASNT NDT Level III certified in ET, MT, PT, RT and UT. Lawson’s years of experience, including his years as a NADCAP auditor, made for an informative section meeting. 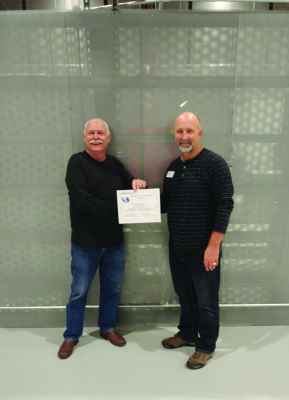 The Greater Houston Section met on 9 January at Republic Grill at the Battleground Golf Course in Deer Park, Texas. Section Chair John R. Huffman opened the meeting with several announcements about upcoming spring events. The Section looked ahead to a busy March, which would include a vendors’ night on 20 March and the golf tournament on 22 March. Samuel (Roger) Jordan announced that applications for Tech of the Year would be closing mid-February. Individual introductions were made around the room and several door prizes were given out.

The Section would like to thank the following companies who gave graciously to help sponsor the costs of the meeting: Mistras, NDS Products Inc., PH Tool Reference Standards, and Turbo NDT. Their generosity and continued support to the Section is very much appreciated. Forty people were in attendance, consisting of instructors, students, members, and guests. 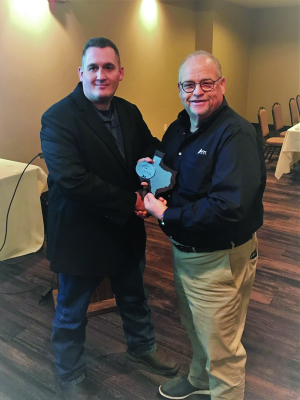 On 17 January, 25 members and guests of the Minnesota Section met at the American Legion Post 580 in Chanhassen, Minnesota, for a technical presentation by guest speaker Travis R. Lerohl, who is the responsible NDT Level III for Chart Industries Inc. Chart Industries Inc. manufactures high-pressure tanks and storage containers. Lerohl gave a very detailed and well-delivered presentation detailing the use of fracture mechanics acceptance criteria for ultrasonic inspection. This presentation ignited many thoughtful and information-filled conversations. Lerohl also explored ASME Section VIII evaluations for phased array ultrasonic inspection, and how he and his skilled team were able to superimpose these parameters into their quality manufacturing process. The Section would like to once again thank Lerohl for his very informative and well-received presentation. 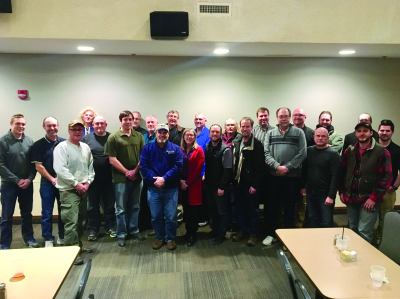 The Narragansett Bay Section held a meeting on 29 January at the Atwood Grill in Johnston, Rhode Island, with 39 members in attendance. Also in attendance were students and graduated students from Assabet Valley Regional Technical High School. ASNT Past President Robert A. Feole spoke about ultrasonic applications and NDT careers. ASNT Regional Director, Region 1, John P. Moran also attended the meeting. All attending enjoyed the discussion on NDT careers, especially the students in attendance. It was also announced that the Narragansett Bay Section will be sponsoring a scholarship.

On 17 January, the North Carolina Student Section met at Central Piedmont Community College (CPCC) for its first meeting of the year. During the session, Section Chair Zachary Baze addressed the members and discussed the Section’s annual George Pherigo Memorial Golf Tournament. The Section also hosted representatives from GOM Americas Inc. Attendees had the opportunity to learn about GOM’s technology and how they are utilizing precision metrology techniques to influence manufacturing and quality assurance standards. Anyone interested in supporting or participating in the CPCC Annual George Pherigo Memorial Golf Tournament should contact Zachary Baze at zbaze000@email.cpcc.edu.

The Old Dominion Section held their January technical meeting at Calabash Seafood on 28 January. The Section was pleased to see a few members who had been unable to attend over the past few months, and 11 members and guests were present to hear Section Vice Chair Keith E. Erk deliver a presentation on current developments in bond testing. In addition to reports from Section Treasurer Gary C. Schepker and ASNT Regional Director, Regions 3 and 4, William F. Via, Jr., Section Chair Thomas (Ed) Darby put out a call for ASNT award nominations. At the conclusion of the meeting, Darby presented Erk with a hardcover copy of ASNT’s 75th anniversary history book, From Vision to Mission.

Nineteen members of the Pacific Northwest Section met on 14 January at The Old Spaghetti Factory in Tukwila, Washington, to listen to ASNT Regional Director, Region 16, Emery E. Roberts, speak about ASNT and its world vision. Roberts gave an inspiring overview of the impact that ASNT has had in making the world a safer place and provided many examples of all of the services and support the Society provides to its members. 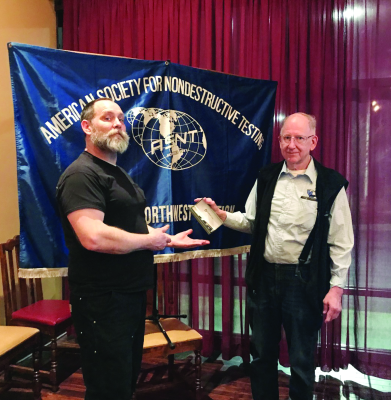 The Pittsburgh Section met on 24 January at the Springfield Grille in Cranberry Township, Pennsylvania, to hear Jesse Groom of Excalibur give an excellent presentation titled “How to Fully Utilize Your Phased Array Technology.” 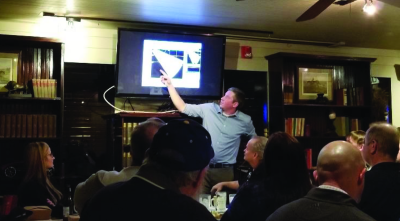 Attendees of the Pittsburgh Section’s 24 January meeting heard a presentation from Jesse Groom of Excalibur.

On 5 February, the San Diego Section hosted a technical meeting at the Best Western Seven Seas in San Diego, California, with 28 members and guests in attendance. The meeting speaker was Douglas D. Burleigh. Burleigh holds ASNT NDT Level III certification in thermal/infrared testing (IR) and has been published in more than 50 technical publications.

Burleigh delivered a presentation titled “Infrared NDT in Aerospace and Other Applications of IR.” The audience expressed its appreciation of the presentation and engaged with the speaker by asking questions on various IR techniques and processes and how the method compares to ultrasonic and radiographic testing, as well as the various applications of IR. The Section thanked Burleigh for his talk and presented him with a speaker gift and certificate of appreciation. 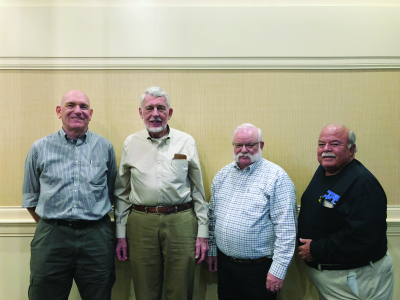 The Saudi Arabian Section held a technical meeting on 13 February at the Carlton Al Moaibed Hotel. The meeting was attended by 110 members and nonmembers, including guests from the Bahrain Society of Engineers. The meeting speaker was Frederic Reverdy of Eddyfi Technologies, who spoke about advancements in weld inspection using PAUT for complex geometry and TFM. After the presentation, Section Past Chair Fathi E. Al Qadeeb distributed the door prizes to the lucky winners and invited everyone to enjoy the buffet dinner arranged by the Carlton Al Moaibed Hotel. 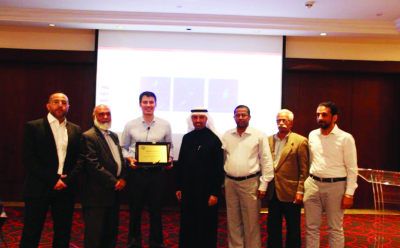 The South Texas Section held their January meeting at Tandoor Palace. Jeremiah Rawls of MPM Products discussed a wide range of NDE technologies. The meeting was attended by 15 members and guests and included a visit from ASNT Director at Large John Z. Chen of Schlumberger.

The Narragansett Bay Section held a meeting on 29 January that was attended by 39 members and students and recent graduates from Assabet Valley Regional Technical High School. A highlight was a presentation about ultrasonic testing applications and NDT careers by ASNT Past President Robert A. Feole. 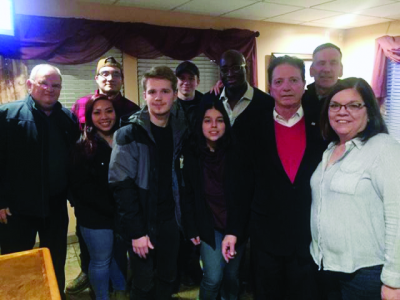