Section members Michael L. Kelley of Olympus America Inc. and Ronald R. Mika highlighted the opportunities and benefits that a career in NDT can provide to high school graduates, such as ensuring the safety of society, providing opportunities for technical/professional growth, and affording personal financial security. Many discussions were held regarding the lower cost of the required education, quick entry into a vital field, opportunity to expand one’s professional focus (for example, on different methods), and the prospect of secure employment over a career. 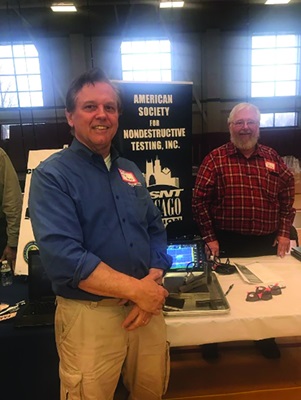 The Golden Gate Section held its Annual Vendor Fair 2020 on 12 March at Embodied Wines in Livermore, California. A great time was had by all. The Section would like to thank all the vendors who provided raffle prizes and purchased a space, and to Allison J. Wright for providing prize-winning cookies. 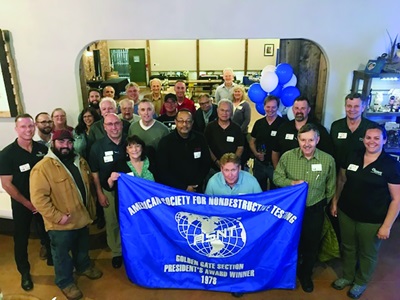 The India Section successfully conducted its training program on eddy current testing via videoconferencing in May with around 220 members in attendance. The Section had the opportunity to have Director at Large and Regional Director, Region 19, Marwan F. Basrawi and Director at Large Sebastian Z. Fernandes attend the meeting. The speaker was Navita Gupta, who gave a great presentation.

The Metro NY/Northern New Jersey Section met on 11 March in Freeport, New York, with 21 members and guests in attendance. The Section was awarded the bronze-level President’s Award. Tara M. Kavanaugh presented the award to Antionette (Toni) Y. Bailey to hold for being the driving force behind the revival of the Section. The Section would also like to congratulate Bailey on becoming their Regional Director (Region 2). Section Vice Chair Edward (Ed) P. Dukich presented on the evolution of the portable UV-A light with demonstrations of older model lights, bulbs, and filters including new LED light assemblies, LED UV replacement bulbs, and the newest flashlights. Demonstrations included the differences (advantages and disadvantages) between mercury vapor arc, high-intensity discharge, and LED bulbs. The presentation was fun, informative, and enjoyed by all.

On 3 March the Pacific Northwest Section listened to Robert D. Gessel present on “Failure Investigation and Monitoring of Roof Transport Wheel Axles,” with 17 members and guests in attendance. The presentation was about a local monument, the T-Mobile Stadium. Gessel presented slides on the investigation that resulted after a wheel bearing broke on the retractable roof. The ultrasonic testing method was used to find the cracks in the axles. A shear wave examination was performed among the other bearings, which determined that there were additional bearings with similar defects. Overall, without having ultrasonic technology, finding hazardous defects like the one that caused the bearing to break would have been a much longer and more costly project. 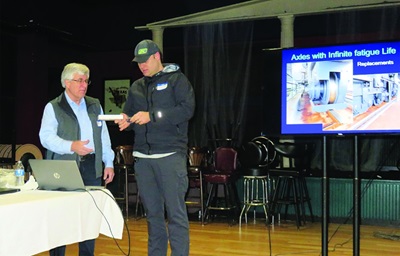 The Rockford Stateline and Chicago Section held a joint virtual technical meeting on 14 April with 18 members and guests in attendance. The guest speaker for the evening was NDT Team Leader Gary E. Mathias of The Modal Shop Inc., located in Cincinnati, Ohio. Mathias presented on “The Basics of the Resonant Acoustic Method per ASTM E2001.” The talk was centered on the ASTM standard and how the resonant acoustic technique can be applied. Mathias first gave an overview of the theory and how the process works, and then showed a number of applications across a wide spectrum of industries. Rockford Stateline Section Chair Joel A. Mohnacky of Collins Aerospace orchestrated the meeting and facilitated the question and answer period.

The Western New York Section hosted an online meeting on 24 March. The schedule for meetings and programs for the coming year were discussed. With the current COVID-19 crisis, the Section decided to schedule an online meeting for May with Chuck Hellier III as the speaker.

The India Section successfully conducted its training program on eddy current testing via videoconferencing in May with around 220 members in attendance. The Section had the opportunity to have ASNT Director at Large and Regional Director, Region 19, Marwan F. Basrawi and Director at Large Sebastian Z. Fernandes attend the meeting. 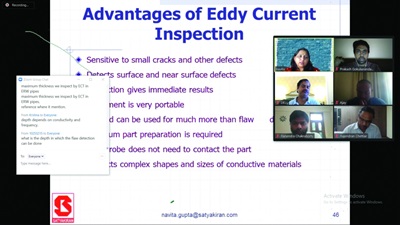 The India Section hosted an eddy current training program virtually in May.