On 18 March, the Beijing Section participated in student/career outreach by giving a lecture titled “Introduction of ASNT and Training and Certification System” during an MT training course. There were 36 students in attendance.

The Kuwait Section organized its 10th technical presentation of the program year (July 2020 to June 2021) on 23 February via an online platform. The title of the presentation was “New Inspection Approach According to Revised API Recommended Practice 941 by Using Olympus HTHA Probes,” by Sabri Baba, advanced NDT manager at Olympus America Inc. The event was presented by M/s Olympus and sponsored by M/s Ashraf and Co. Ltd. Industrial Products in Kuwait. The Section thanked Baba for sharing information on the basic requirements, along with case studies and examples of plate/weld samples and applications of techniques as per API RP-941’s new approaches (2020 edition).

The Kuwait Section listened to a presentation on high-temperature hydrogen attack (HTHA) probes at its 23 February meeting.

The Old Dominion Section held its eighth meeting of the program year on 26 April. The meeting was conducted remotely via an online platform. The technical segment of the meeting included a presentation by Yuri A. Plotnikov, Ph.D., a senior researcher at the Commonwealth Center for Advanced Manufacturing  in Virginia, titled “Commonwealth Center for Advanced Manufacturing and the Development of Multi-Sensor Monitoring for Additive Manufacturing,” which was presented in real time. The presentation was followed by a Q&A session. Six people attended the meeting.

The Pacific Northwest Section held a virtual meeting on 13 April with 11 people in attendance. The Section watched a video presentation titled “Sliding Suction Based NDT Robotic Crawler,” by Peter van Camp of Invert Robotics. The video was followed by a lively discussion among the attendees and a 30-minute networking session. 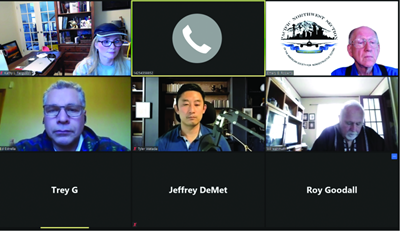 The Pacific Northwest Section listened to a presentation on robotic crawlers at its 13 April meeting.

The Rockford Stateline Section met virtually on 4 May with eight members in attendance. The section chair, Joel A. Mohnacky of Collins Aerospace, introduced the guest speaker, Stuart A. Kleven of Alloyweld Inspection Co. Kleven is an ASNT NDT Level III in four methods and an AWS CWI. His talk for the evening was titled “NDT of Friction Stir Welds.” The discussion started out by describing the friction stir welding process. He then showed various discontinuities that can occur from the process as well as the essential variables of the process, since it is a solid-state weld and the parameters are quite different from standard fusion welding. His presentation summarized a study of about 80 test samples that were inspected using visual testing, visible dye liquid penetrant testing, pre-penetrant etching, angle beam ultrasonics, and computed digital radiography. Numerous examples of each type of defect were presented to demonstrate what type of response each NDT method would obtain from the friction stir process.

The Greater Houston Section hosted a dynamic panel discussion, moderated by ASNT President John T. Iman, that focused on the NDT industry during its 14 April meeting. The panelists were Timothy (Tim) S. Roach of Tenaris, David R. Bajula of Acuren, and John Z. Chen of KBR. 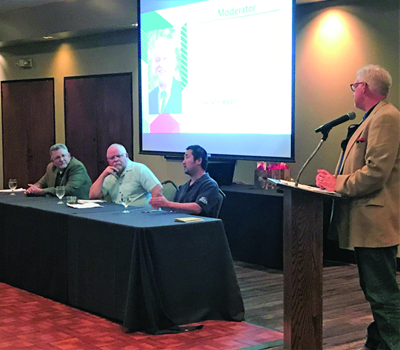