The Capital of Texas Section held a virtual meeting via an online platform on 14 January with 19 members and guests in attendance. Section member Matt Skinner of AOS-NDT gave a presentation covering new ultrasonic technology including phased array, full matrix capture, and the total focusing method. Many examples of calibration and field inspections were also provided with real-time demonstrations. Section Chair Scott D. Miller introduced Skinner and welcomed guests from the Northern New England Section. The Section would like to thank William Hinton for providing technical support. Both sections entertained combining some future virtual meetings to increase attendance and educational opportunities for all.

The Charlotte Section hosted its annual Christmas party on 5 December at the Red Hill Brewing Company in Concord, with a total of 23 attendees. The event was catered by Gianni’s Trattoria. After dinner was served, the Section enjoyed some pies and assorted cookies for desserts. Before wrapping up the evening, attendees participated in a secret Santa gift exchange.

The Chicago and Rockford Stateline sections held a combined virtual meeting on 11 January. The guest speaker for the evening was ASNT President John T. Iman.

In his introduction, Iman described how involvement in ASNT has positively affected his career and personal life, to the point of even working with astronauts, which he never could have predicted. His presentation titled “The State of the Society” highlighted four areas on which ASNT will be concentrating: programs, people, strategic planning, and problems. Under programs, he reviewed the progress made with the ACCP, ISQ, and initiatives with ISO and other societies. Under the topic of people, he addressed the importance of growing the number of members and the methods being used to retain and gain new members. With strategic planning, the emphasis was placed on strengthening the certification program, improving advocacy of nondestructive testing to federal and local government bodies, and integrating with other societies, showing the value of membership to practitioners and their career advancement as well as addressing new technologies. In confronting challenges, Iman issued a call for action. The foundation of ASNT has been the great volunteer spirit in its members; even with that, the ongoing need to fill committee positions with new people was stressed. Finally, a request was made to the meeting attendees to express their needs or concerns. A number of persons in attendance gave valuable input on areas where improvement or involvement of ASNT could benefit them and the Society. Section Chair Charles (Chuck) P. Johnson of Karden Sales closed the meeting with a word of appreciation for the presentation and member involvement. 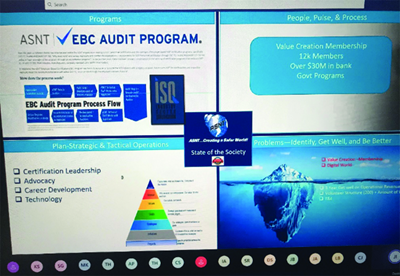 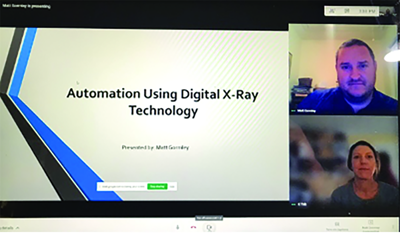 On 19 January, the Great Salt Lake Section met virtually with 14 members in attendance to listen to a presentation given by Brad R. Hoskins, the owner of Silean LLC. Hoskins gave a presentation discussing the regulations, type of inspections, inspection setups, and some of the issues with traveling around the world performing nondestructive wing inspections. The presentation was very interesting and informative. The Section greatly appreciates Hoskins’s willingness to present at its meeting. 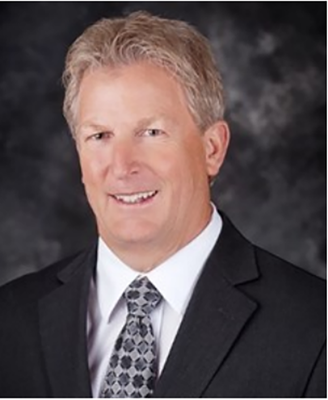 The Greater Houston Section met on 13 January at the Republic Grill at Battleground Golf Course in Deer Park, Texas. Twenty-one individuals attended in person and 18 virtually. Section Char Zachary (Zac) Wayne Sebren opened the meeting with several announcements, then individual introductions were shared around the room. 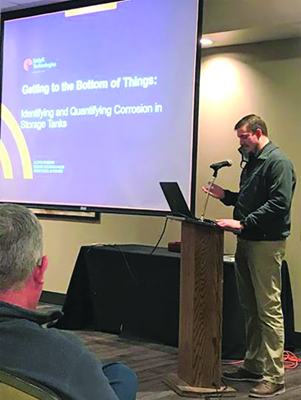 The Kuwait Section organized its seventh technical presentation of the 2020–2021 program year on 22 December via an online platform. About 16 professionals attended the technical presentation. The title of the presentation was “Introduction to FMC (Full Matrix Capture) and TFM (Total Focusing Method) in Phased Array Ultrasonic Testing,” by Dhananjaya Mani Tripathi, the QA/QC department manager and responsible Level III at M/s Alghanim International – Oil & Gas Division, Kuwait.

The technical presentation encouraged members and guests to share their practical experience. It was a wonderful explanation on using FMC to collect data in elementary A-scans and composing the data by using TFM. It was explained that FMC/TFM is useful for capturing the smallest indication and characterizing it precisely. The Section appreciated the presentation.

Five members and guests of the Old Dominion Section met at the Italian Kitchen restaurant on 16 December to share holiday fellowship and reflect on the challenges of the past year, both personally and professionally. The Section was thankful that it managed to maintain an active schedule to support normal operations in a season of so many changes. The Section also mourned the passing of two of its founding and most prominent members, William (Bill) F. Via, Jr., and William (Bill) W. Briody. The Section hopes to continue as many of its traditional meetings as possible and have a successful year.

The Pacific Northwest Section held a virtual meeting on 12 January with seven members and guests in attendance. The speaker was Bruce Breeden of Floodlight Software, and attendees watched a video presentation entitled “The Operational Value of Digitizing the NDT Inspection Process.” The video was followed by a lively discussion among the attendees. After the video discussion, the Section held a 30-minute networking time that everyone participated in.

The Saudi Arabian Section held its sixth technical meeting of the 2020–2021program year on 8 December. The meeting was conducted via an online platform and was attended by 110 members and guests. Section Past Chair Fathi E. Al-Qadeeb, Section Chair Abdullah Mohammed Al Khalifah, and Section Vice Chair Mohammed A. AbuFour inaugurated the meeting with a warm welcome to all members and guests.

This meeting held was in partnership with Arkan Alfalah Co. for Industry and Engineered Robotics LLC. Marius Aben, owner and general manager at Engineered Robotics LLC, presented on “Online Robotic Tank Inspection and Cleaning.” The meeting concluded with a Q&A session and raffle drawing. The virtual meeting was well organized by Al Khalifah and Liju Mathew. 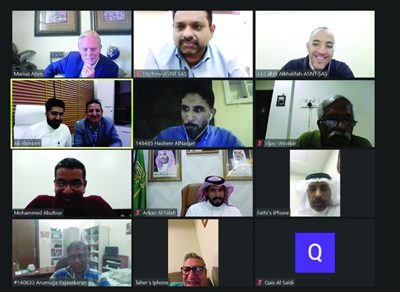 The Saudi Arabian Section held its sixth technical meeting of the program year virtually in December. 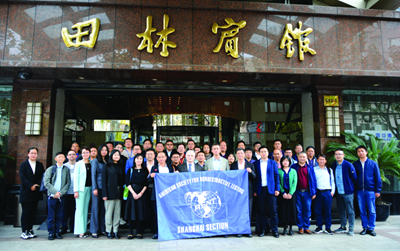 The Shanghai Section met in October for a half-day meeting that involved eight presentations on NDT, including ASNT’s new employer-based certification audit program.

The Southern Africa Section held a virtual technical meeting on 25 January. Kevin Bertrand of Eddyfi Technologies (Quebec) presented on “Tangential Eddy Current Array for Weld Inspection.” Tangential eddy current array (TECA) is an advanced electromagnetic inspection technology that uses an eddy current array to introduce alternating currents into the surface of the component under test to detect and size surface-breaking cracks. This highly informative meeting was very well attended by 30 participants. The Section is finding that virtual meetings are very popular for its members to obtain recertification points.

The Charlotte Section hosted its annual Christmas party on 5 December at the Red Hill Brewing Company in Concord. The Section enjoyed some pies and assorted cookies for desserts, and participated in a secret Santa gift exchange. 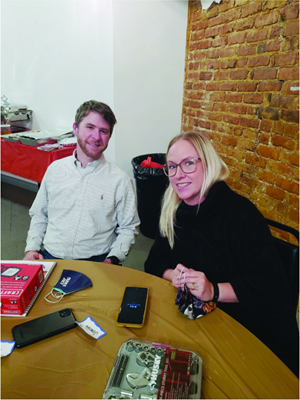